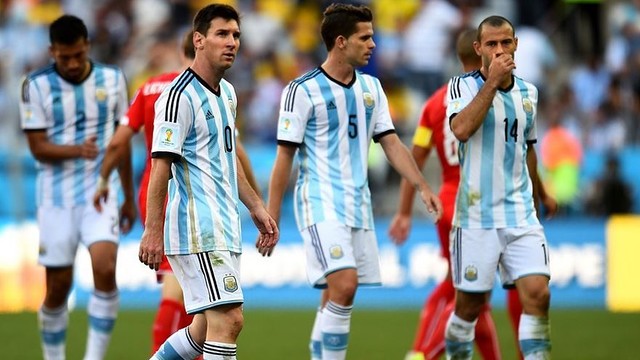 Argentina face Belgium in Brasilia at 8.00 PM CET, and a place in the semi-finals is the reward for the winners

Messi, who already has four goals in the tournament, will be hoping to play yet another decisive role

The second pair of World Cup quarter-finals will be played this evening, and Leo Messi and Javier Mascherano’s Argentina are in action. After Neymar and Dani Alves’ Brazil secured passage to the semis against Colombia last night, the 1978 and 1986 champions now face one of the most impressive teams of the tournament, Belgium, at 8.00 PM CET in Brasília.

Alejandro Sabella’s is facing one of the youngest and liveliest sides in the competition. The squad includes the likes of Thibaut Courtois (22 years), Eden Hazard (23), Marouane Fellaini (26) and Romelu Lukaku (21), as well as more experienced stars like Vincent Kompany and Vertonghen. That’s why almost everyone has been citing them as dark horses for the title this year.

Managed by Marc Wilmots, they have won four out of four so far. They topped their group with the maximum points after beating Algeria (2-1), Russia (1-0) and then, despite resting most of their biggest names, South Korea (1-0). Their round of 16 game with the United States went into extra time, but they ended up winning 2-1 to go into the last eight.

There is one man people are talking about more than anyone in the Argentina team, and that’s Leo Messi. He is the only player who has won four Man of the Match awards in Brazil, and has scored four goals as well as supplying one assist, for Di Maria to score against Switzerland in extra time in the first knockout match. The South Americans had reached the second round after, like Belgium, winning all three of their group matches, against Bosnia, Iran and Nigeria.