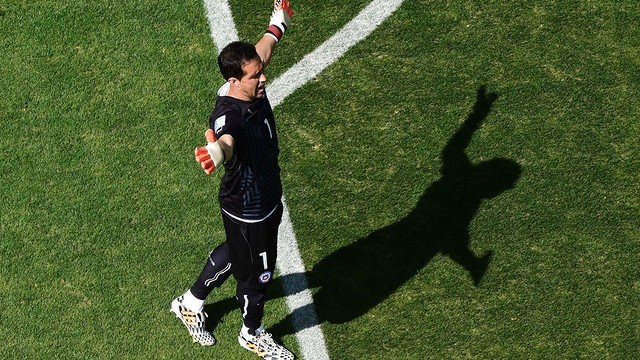 On Sunday 6, the Chilean will be appearing for the traditional photo in front of the club offices

Claudio Bravo will be officially presented as a new FC Barcelona player on Monday 7 July. The goalkeeper arrives in the city on Sunday 6 following his country’s elimination by Brazil on penalties at the 2014 World Cup.

Bravo will be appearing for the traditional photo in front of the club offices on Sunday at 8.00 PM CET. The following day he is due for a medical check at 9.00 AM CET at the Ciutat Esportiva Joan Gamper. Then at 11.15 AM CET he’ll be signing his contract with FC Barcelona in the Camp Nou presidential suite, and immediately after, at 12.00 PM CET, he’ll be appearing on the pitch for the first time in an FCB jersey. Then comes the press conference in the Ricard Maxenchs pressroom, due to start at around 12.45 PM CET and which will be streamed in English via this website.

Last July 25, FC Barcelona announced that they had struck a deal with Real Sociedad for the transfer of the Chilean national captain.