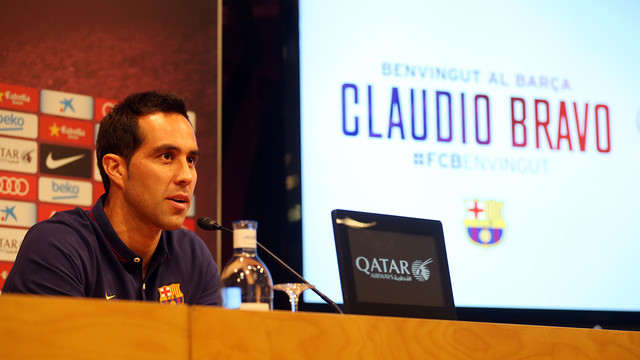 “It’s a challenge for me” he says. “This a club with a strong goalkeeping tradition”

On the competition he’ll face from Ter Stegen and Masip, he feels that “we’re all starting from scratch”

Claudio Bravo has only been at Barcelona for a few hours and he already claims to be feeling at home. He was speaking at his official presentation in the Ricard Maxenchs pressroom, where he was joined by FCB vice-president Jordi Mestre and director of sport Andoni Zubizarreta. “I am so proud to form part of this institution” he said. “I want to thank Barça for putting their trust in me. I have always hoped that a moment like this would come.”[[CITA_2]]The Chilean commented that “I am here with the hunger to do things well”, and knows what a tough job it will be replace somebody like Víctor Valdés. “When I arrived at Real Sociedad, Arconada’s name could be heard everywhere” he explained. “Now I am at another club that has had some great goalkeepers with a tremendous history. It’s a challenge for me.” [[CITA_1]]But Bravo neither feels like a first or a second choice goalkeeper. He knows that he’s going to face stiff competition for the first team role at a club like FC Barcelona. “I think all three of us are starting from scratch and we are all here for the same thing, for the good of the team. From my point of view, I am safe in the knowledge that I am here to work as hard as I can … I have never played for any team where I have always known that I’d be the first choice.”

Andoni Zubizarreta described him as a “goalkeeper with personality, character and a competitive spirit, who relates well with his defenders and is excellent with his feet”. The director of football added that “I’m delighted that there’s so much competition for the goalkeeper’s role” while confirming that “Ter Stegen always knew that we would be signing a third first team goalkeeper.”