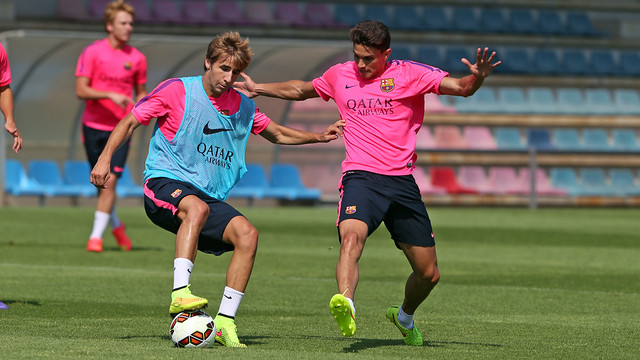 The first team returned to work this morning after having Thursday evening off, with Cámara of Barça B replacing Diagne

Luis Enrique’s side has a second session scheduled for this evening before the first friendly, in Huelva, on Saturday night

Barça went back to training on Friday morning at the Ciutat Esportiva Joan Gamper after having Thursday evening off. Like yesterday, Luis Enrique had 23 players to work with. Eight of those were from the first team, namely Ter Stegen, Masip, Montoya, Bartra, Sergi Roberto, Deulofeu, Afellay and Bojan.

Adriano and Rafinha were once again missing. The full back is out for between 4 to 6 weeks after an abnormal heart rate was detected in Monday’s medical, while the midfielder is still suffering from a bruised big toe.

As on other days this week, the group was boosted by the presence of 15 players from Barça B. But there was a slight change, with Juan Cámara, one of the new inclusions in the reserve team, stepping in for Diagne and thus training with the first team for the first time ever. The other Barça B players involved this morning were Patric, Bagnack, Edgar Ié, Lucas, Grimaldo, Samper, Halilovic, Babunski, Cámara, Munir, Sandro, Dani Nieto, Joan Román, Dongou and Adama.

The team will work out again this evening, the last session before departing for Huelva for the first preseason match of the summer at the Nuevo Colombino against Recreativo (10.00 PM CET).