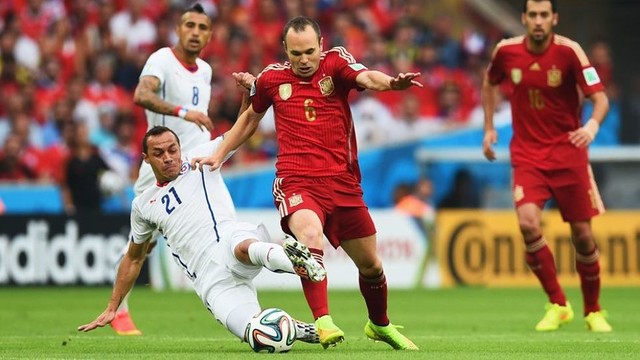 As the World Cup comes to the end of the group stages, eight Barça players are already on their way home after their countries failed to make the knock out rounds. Below we take a look at how they performed:

Gerad Piqué: Started the opening game against Holland, but did not figure again for Del Bosque’s side, dropped for the Chile game and injured before the match against Australia.

Jordi Alba: Played left back for the full 90 minutes of each of Spain’s group games.

Sergio Busquets: Started the first two group games, but omitted from the team against Australia. Completed 91.2% of his passes, just behind Spain’s most accurate passer Xavi, with 93.6%.

Xavi Hernández: Only played in the opening game against Holland and was then dropped to the bench for the defeat against Chile, missing the Australia game with an injury.

Andrés Iniesta: Marked his hundredth game for Spain against Australia with a lovely assist for Fernanado Torres and like Alba played 90 minutes in all of the three group games.

Pedro Rodríguez: Came on just past the hour mark against Holland and then started against Chile before being subbed on 76 minutes by Cazorla. Didn’t figure in the final game against Australia.

Alex Song: The 1-4 defeat to Brazil on Monday meant Cameroon finished bottom of their group. Song missed that game after picking up a yellow against Croatia. He played 119 minutes of the first two group matches.

Ivan Rakitic: The Croatian’s transfer to Barça was confirmed after his first appearance against Brazil and Rakitic went on to play the full 90 minutes against Cameroon and Mexico – in a game where he set up Perisic’s consolation goal.

Alexis, Messi, Mascherano, Neymar Jr and Dani Alves will all be playing in the next round of the tournament.