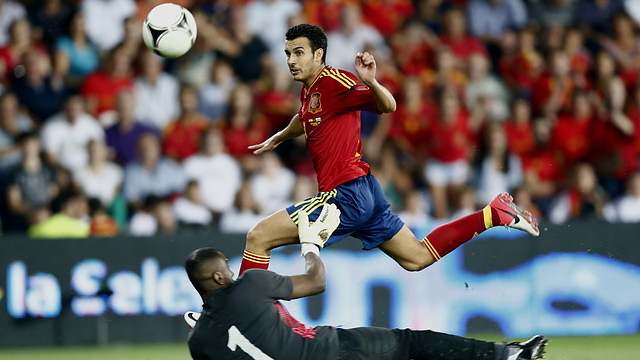 Nine FC Barcelona players have World Cup games this evening, and all of them will be playing against club colleagues. Spain v Chile (9.00 PM CET) and Cameroon v Croatia (12.00 AM CET) are both on tonight’s menu, and after three of those teams lost their opening matches, tonight’s games are more crucial than ever.

Spain v Chile at the Maracanà

The legendary Maracanà will be venue as FCB’s Piqué, Sergio Busquets, Jordi Alba, Xavi, Iniesta and Pedro face Alexis Sánchez and Chile. The circumstances are different for the two teams. After winning their first game 3-1, another Chilean win would put the South Americans into the last 16 if Holland have beaten Australia in the first game of the day. Meanwhile, Spain, after being heavily defeated by the Dutch in their first encounter, now need to win in order to keep their qualification hopes intact.

The third and final game of the day also has double Barça interest. Rakitic will be playing his first World Cup game since the announcement of his transfer to FC Barcelona, and he’ll be doing it against one of his future team-mates, Alex Song of Cameroon. With Brazil and Mexico both on four points after Tuesday’s draw and with Croatia and Cameroon on none, defeat for either of these sides would leave them out of the competition.