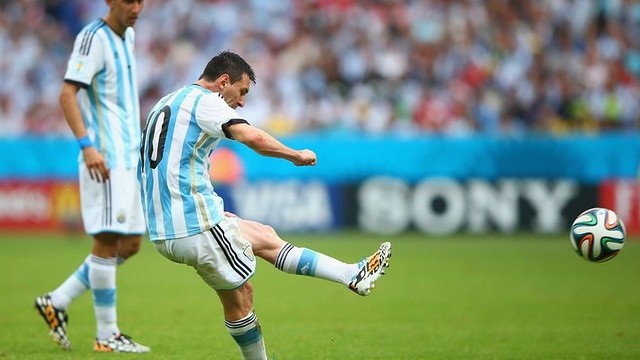 Alejandro Sabella’s team closed out the group stage with a perfect record after they beat Nigeria 2-3. The FC Barcelona forward put in a brilliant performance and scored two goals

This Wednesday Leo Messi and Javier Mascherano’s Argentina closed out the group stage of the World Cup with a perfect record of three wins from three matches. The men managed by Alejandro Sabella defeated Nigeria by 2 to 3 which saw Messi, who scored a brace, put in a stellar performance. Nigeria equalised twice, but a goal from Rojo on 50 minutes sealed the three points.

Leo Messi was decisive in Argentina’s first two matches, and he stamped his mark on the third in a matter of minutes. After only two minutes of play, Argentina’s No.10 latched on to a loose ball in the area and pounded it into the back of the net. Argentina’s lead didn’t last long, however, seeing that in the following minute Musa scored the equaliser after a brilliant individual play.

From that point on, the South Americans regained control of the match but the dominance didn’t translate into many goalscoring chances on Enyeama’s goal. Meanwhile, the Nigerians tried to hit back through counterattacks. Messi came close to scoring his second on a free kick but the keeper averted the shot to a corner. The following play would give Messi another crack at goal from a dead ball. This time the Argentinian perfectly executed the shot and put Argentina ahead just before the break.

Nine points out of nine for Argentina

The second half started just like the first, only this time it was Nigeria that scored early. Musa, once again, got in between the Argentinian defence and brought his team level. But Argentina hit back through Rojo, who got on the end of a corner kick to score the definitive 2-3. Messi was subbed out on 63 minutes.

With this victory Alejandro Sabella’s men seal passage to the next round as group winners, where they will most likely face either Switzerland or Ecuador. Messi is also the leading goalscorer of the World Cup along with Neymar Jr with four goals.