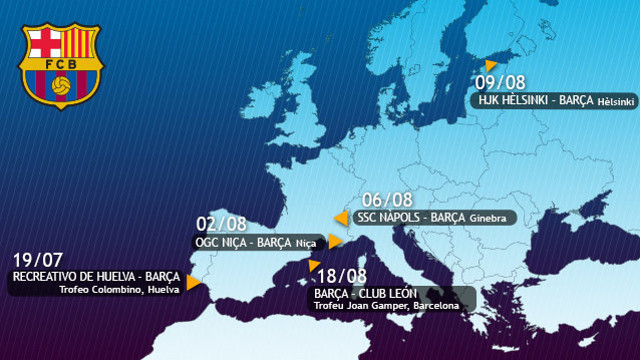 Luis Enrique and the new-look FC Barcelona get going on July 19, with the preseason ending on August 18 and the Joan Gamper Trophy

Recreativo Huelva, OGC Nice, HJK Hèlsinki and Club León are the opponents that have already been announced

FC Barcelona’s preseason fixture list is filling up fast, but is still not definitive. Luis Enrique’s first test in the managerial role will be on July 19 at 10.00 PM CET at the Nuevo Colombino against Recreativo Huelva. Two of the oldest clubs in Spanish football will be competing for the Andalusian outfit’s annual preseason trophy, the Trofeo Colombino.

FCB will be travelling to that game with the players that are due back to start training on July 15, which is all them apart from those that have played at the World Cup in Brazil and the new signings, like Ter Stegen, Rafinha and Deulofeu. That means that several members of Eusebio’s Barça B will be involved. The reserves will also be reporting back for duty on July 14.

The preseason will last a full month, ending with the game at the Camp Nou for the Joan Gamper Trophy, which this year takes place on Monday 18 August and sees the Catalans take on Club León de Guanajuato, the Mexican side that features former FCB man Rafa Márquez as well as his international team-mates Carlos Peña and José Juan Vázquez. This will be the first time that the current Closing 2013 and Opening 2014 champions will have appeared at the Camp Nou. The game will be doubling as a testimonial to Carles Puyol and Víctor Valdés, who left the club at the end of last season.

The fixture list is not complete yet, but three other friendlies have already been announced. Barça will be facing Olympique Nice of France on August 2 in their Allianz Riviera. After that, they’ll be meeting SSC Napoli, who finished third in the Italian Serie A last season and will be preparing for their Champions League qualifying match later on in the month. The Barça v Napoli friendly will be played on neutral territory, on August 6 at 8.00 PM CET in Switzerland’s Stade de Genève. The next stop for FC Barcelona will be the Finnish capital of Helsinki, where they’ll be meeting the national champions, HJK, at the Olympic Stadium on August 9.