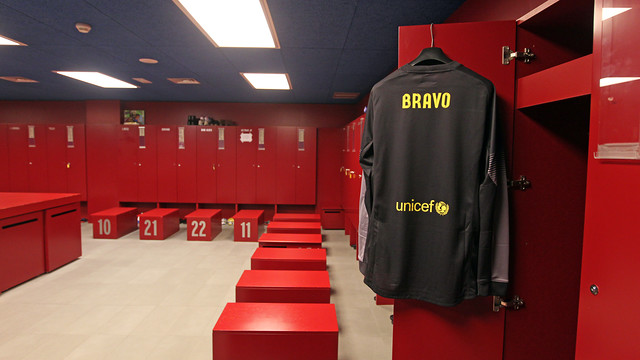 Claudio Andrés Bravo Muñoz (Viluco, metropolitan region of Santiago, 1983) has been a renowned goalkeeper at both club and international level for Real Sociedad and Chile. He started out at Colo-Colo, making his first official appearance in 2002 when he was still only 19 years old. In 2006, he headed for Europe and Real Sociedad.

1.85 metres tall, Claudio Bravo is a notoriously agile keeper, and is the kind of man who brings tranquillity to his defence. He’s also especially gifted with the ball at his feet, a useful quality in any goalkeeper.

Mark made at Real

His eight seasons at Anoeta have not always been easy. Bravo lived through the relegation of 2007 and lost his role as first choice stopper the season after. But there have been good times too, such as qualification for the Champions League in 2012/13 and winning the Second Division Zamora Trophy for the best goalkeeping record.

He arrived in San Sebastian as a young hopeful and is leaving as one of the finest keepers the club has ever known. He is the second most used foreigner in club history and has the third highest number of appearances for a goalkeeper.

Known in his home country as the ‘Condor Chico’, in honour of legendary keeper Roberto ‘Cóndor’ Rojas, Claudio Bravo has captained the Chilean national side since 2008, when he inherited the armband from the great Marcelo Salas. This summer, he’s appearing in his second World Cup after leading Chile into the last sixteen at South Africa 2010, where they lost to Brazil.