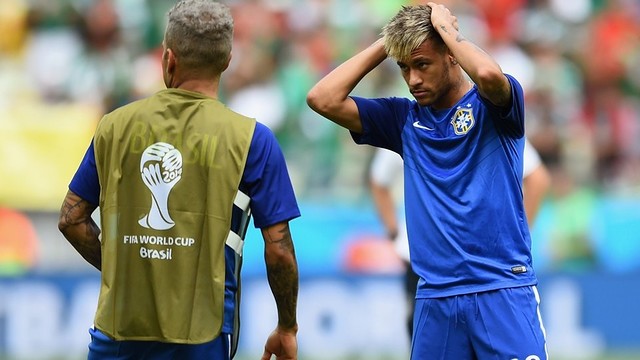 Song is suspended for Cameroon’s game with Brazil

Spain are hoping to end a poor World Cup with a win, while Alexis’ Chile will contest top spot in Group B with Holland

The third and final round of group matches gets under way at the Brazil 2014 World Cup on Monday, and there is plenty of Barça interest in the four games being played that evening. But the FCB players find themselves in contrasting situations. Spain and Cameroon are already out, while Chile are safely through to the last sixteen. Meanwhile, Brazil and Croatia are both strongly poised to make it out of Group A.

After drawing with Mexico in their second game, tournament hosts Brazil are not yet guaranteed a place in the second round. A win against Cameroon on Monday night would see them through as group winners, while a draw would be enough to ensure qualification. And there’s a good chance they could even lose the match and still avoid elimination. So the odds are heavily stacked in favour of the team that features Neymar and Dani Alves against a Cameroon side that failed to score in either of their first two matches, and is now just playing for pride. To make matters worse for the West Africans, Barça’s Alex Song misses the Brazil match through suspension.

For Barça’s new signing Ivan Rakitic and the rest of the Croatia squad, the mission is simple. Beat Mexico. A draw would only be of use to them in the very unlikely event of Brazil losing to Cameroon. It promises to be a fascinating match between two sides that struggled to qualify for Brazil, but have been very impressive now that they are there.

Spain bow out against Australia

The Spanish team have returned to Curitiba to prepare for the next match, which will also be the last for the current champions after they lost both their opening fixtures to lose all hope of qualifying for the last sixteen. Xavi, Iniesta, Piqué, Busquets, Pedro and Jordi Alba all trained normally ahead of Monday’s game with Australia, who are also out of contention for a place in the next round. A win for Spain would at least mean they don’t finish last in their group.

Meanwhile, Alexis and his Chile side are already safely through to the next round, with some now tipping them as a strong outside bet to go on and win the competition. They face fellow qualifiers Holland in the final match, but both sides will be desperate to win this one all the same. The group winners will almost certainly face either Croatia or Mexico in their first knockout match. Neither of those are easy opponents, but the team that finishes second will probably face the even more daunting prospect of a match-up with host nation Brazil.