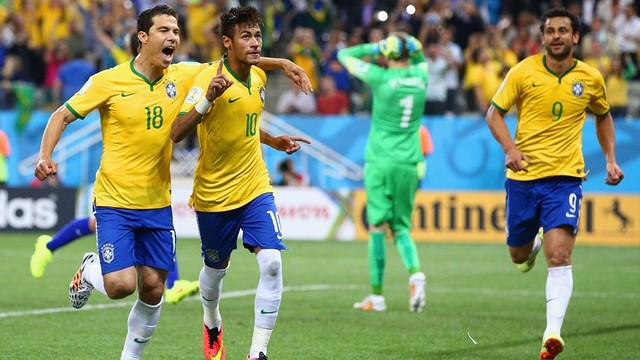 A Marcelo own goal put the Europeans ahead, but two from Neymar and one from Oscar turned the game around

Brazil opened the 2014 World Cup with a 3-1 win over Croatia. Neymar and Alves both started for the host nation and tournament favourites, and the Barça striker delivered in style with two goals in a lively opening fixture.

But things got off to a surprise start, with Croatia, who had already come close through Olic, talking the lead when Real Madrid’s Marcelo put the ball in his own net. Brazil immediately reacted, with Croatia keeper Pletikosa being put to the test on several occasions, including a fine save from Oscar after 21 minutes following a dazzling move by Neymar down the right wing.

The Barça striker got his first World Cup goal in the 29th minute with a long, low left-footed shot that skimmed inside the post. Shrugging off all the pressure, Neymar was the outstanding figure in the Brazil team, and that goal puts him among his country’s ten highest goalscorer of all time.

Brazil were enjoying almost all the possession, but were uncharacteristically slow to get the ball forward and perhaps relied too much on often aimless crosses from the full backs. Croatia regained their confidence, and particularly after the break began creating chances of their own, with Scolari opting to replace Paulinho with Hernanes in an attempt to put his side back in control.

It was Neymar who finally put Brazil ahead with a penalty after Fred went down in the box, although replays showed that was little or no contact. And Pletikosa looked to have saved the spot-kick, but the strength of Neymar’s strike meant the ball went straight through his hands. Shortly after, Croatia looked to have equalised, but the referee had already blown for a foul on Julio César.

It was a dramatic finale, and Brazil were never assured of the three points until the very end, when Oscar ended a solo run through the Croatia defence by scoring their third goal of the night. Brazil are off to a winning start in a group that also includes Cameroon and Mexico, and Neymar already has two goals in his account and is living up to the expectations of being one of the biggest stars of Brazil 2014.