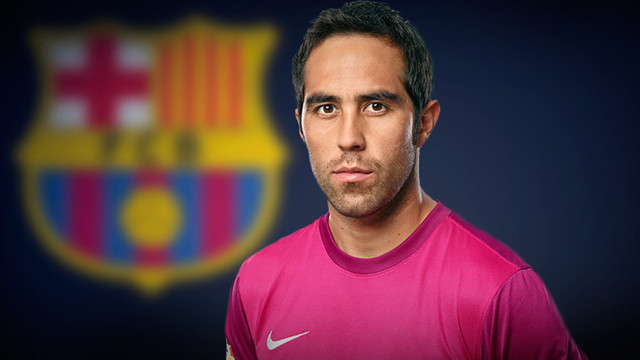 FC Barcelona and Real Sociedad have reached an agreement for the transfer of goalkeeper Claudio Bravo.

Claudio Bravo will sign a contract with FC Barcelona for the next four seasons.

Experience and calmness between the posts

Claudio Bravo, 31, is coming to Barça after eight seasons playing for Real Sociedad, and also captaining the Chilean national team. The new keeper came through the Colo-Colo youth system, making his first team debut in the First Division, at 19 years old, in 2002. He played for the Chilean team until 2006, when he signed for the Basque outfit. In San Sebastian he has become a natural leader after eight seasons: he is the second non-national with most matches played, and became the third goalkeeper in the history of the club playing most matches in a Real Sociedad shirt.

The goalkeeper, who is currently contesting the World Cup in Brazil as team captain of Chile, will come to the Camp Nou along with the other new keeper, Marc-Andre ter Stegen. At 1.85 metres tall, Claudio Bravo is noted for his calmness between the posts, his leadership skills, and lots of agility. Since 2008 he has been the captain of the Chilean national team, and at Real Sociedad he became one of the natural leaders of a team that in recent years have done really well in La Liga.