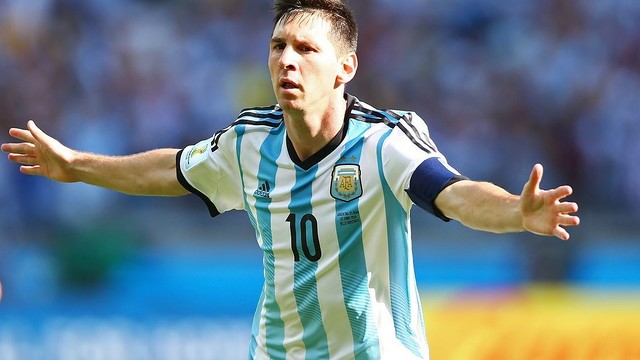 Messi named Man of the Match

Leo Messi was also named Man of the Match after scoring the winning goal and making 49 successful passes and six shots on goal.

Leo Messi scored a stunning injury time winner to give Argentina a 1-0 win over a brave Iran in Belo Horizonte on Saturday, a result that ensures Alejandro Sabella’s team a place in the next round. Both Messi and Mascherano  – who won his hundredth cap -played the full 90 minutes against an Iran team who will feel unlucky to lose after holding out and indeed looking the more threatening at times before Messi’s magical strike deep into injury time.

With the game goalless and just a few minutes of injury time left, Messi picked the ball up 30 metres from goal and stepped forward to unleash an unstoppable shot that gave Argentina their second win of the tournament and leaves them top of Group F, with Nigeria and Iran on one point each and Bosnia bottom with zero.

Messi had always looked Argentina’s main threat and came close twice in the second half, with a side footed effort going just wide on the hour mark and a superb free kick flying hitting the side netting on 74, but Iran also had their chances –most notably a pretty clear looking penalty appeal on 55 minutes and a flying header from Dejagah  just turned over later in the half.

Argentina’s final group game is against Nigeria next Wednesday.