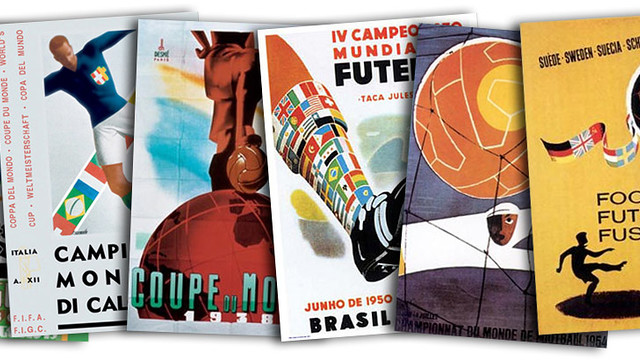 In the countdown to the start of the World Cup Finals in Brazil, we begin a series of reviews of all previous tournaments, from a Barça perspective. The first period analysed is between 1930 and 1958, when Barça was not heavily represented in the World Cup.

Although Barça finished in second last position In the Spanish League in 1933/34, in the list of 22 called up by the Spanish coach, Amadeo Garcia Salazar, for the World Cup Finals in Italy, there were three Barcelona players: Nogues, the goalkeeper, defender Zabalo,  and striker Ventolra.

In the match against Italy in the quarterfinals (1-1) seven Spanish players were injured, so in the replay, played the next day, the three Barça players made their debuts. The match ended with a 1-0 win to Italy.

These World Cup Finals were played in the midst of the Spanish Civil War (1936-39) and for obvious reasons Spain did not participate. In the 1935/36 season, the last one before the outbreak of war, the Barça players in the national team had been Balmanya, Raich, Areso, Ventolra, and Escola..

Players from Barca who went to Brazil were Ramallets, the goalkeeper, defender Josep Gonzalvo, midfield Marià Gonzalvo, and forwards Basora and Cesar.

The consecration of Antoni Ramallets came at those 1950 World Cup Finals, when he was christened with the nicknames the Maracana Cat and the Handsome Goalie

Another Barca star who shined in Brazil was the right winger Estanislao Basora, author of four goals, scored against the United States, Chile, and Uruguay (2).

Spain did not participate in these World Cualsp Fin, as they failed to get through a controversial preliminary round against Turkey, which was decided in a replay on 17th of March 1954 in Rome

An hour before the game was due to start, a FIFA representative came into the Spanish dressing room, with an alleged telegram from the international body, warning about Kubala’s presumed irregular situation, and that if Laszi played, Spain would be automatically disqualified. It didn’t occur to anybody to check the authenticity of the telegram or to call FIFA to clarify the bizarre situation; Kubala had played in Istanbul three days before without any problems and no one had complained. Laszi, who was the star of the team did not play that game, which ended in a 2-2 draw, and Spain were eliminated at the innocent hand of an Italian boy who drew out Turkey in the subsequent draw, according the rules. FIFA subsequently strongly denied being the author of the mysterious telegram.

Once again, the Spanish National team was left without a ticket to the World Cup Finals, in this case after failing to get through the qualifying group against Switzerland and Scotlan, thus frustrating the certain participation of Barça players Ramallets, Olivella, Verges, Segarra, Basora, Kubala and Suarez.