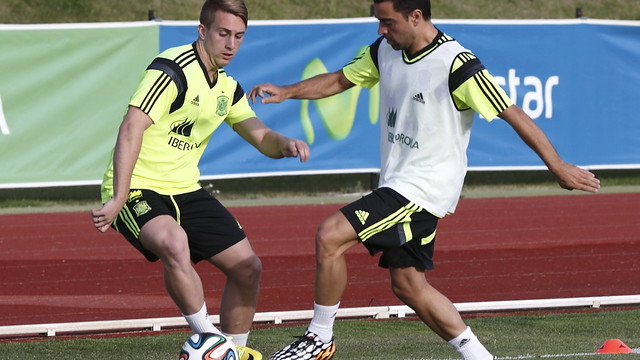 In a press conference for the Spanish national team, Gerard Deulofeu said he’s happy to return to his home, Barça. “It’s been a really great week, marvelous. It became official that I’m coming back to Barça and that they want me. I’m very happy, I’m going home,” he said. “I’ve been given a chance with the Spanish national team and I expect to take advantage of it.”
[[CITA_1]]
When asked about his year away at Everton, the forward said that it was a positive experience: “It was a good experience. I learned a lot, both as a footballer and a person. I had some back luck with injuries that kept me out for two months. I think I could have given more of myself, but I’m happy to come home, that was my objective. Now it’s time to work for Barça.”
[[CITA_2]]
When asked about his inclusion to the Spanish national team for the friendly against Bolivia, the player said, “I’m not thinking about going to Brazil. I have to enjoy this week that’s been given to me and learn from these great players. After that we’ll see what happens.” He added: “Navas is injured and that puts me a bit closer to going, but I’m not thinking about that. There are very good players available, and no one knows what will happen in the future.”

Deulofeu went on to thank Xavi, Iniesta and Busquets for “treating me well and making me feel part of the team.”

I learned a lot at Everton, both as a footballer and a person
I’m not thinking about Brazil. I just want to enjoy this week that I’ve been given with the national team