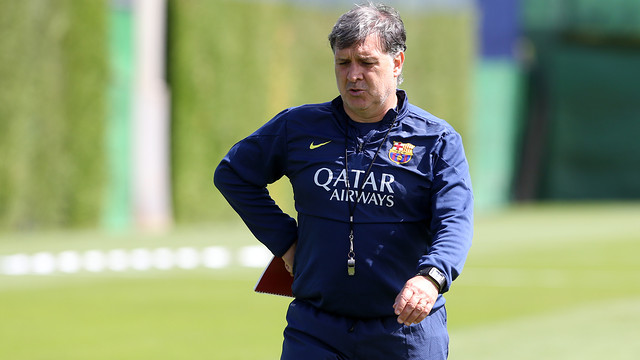 The FC Barcelona manager admits that his team’s title hopes are fading, but promises that they will fight to the end

In his press conference before the game with Getafe at the Camp Nou, Barça manager Gerardo Martino has spoken about the difficulty of the challenge ahead. “It’s a clash of different needs” he said. One team wants to escape relegation and the other wants to keep its hopes of winning the title alive … It’s a very complex situation because our opponent is on a knife-edge.” [[CITA_1]]

As for how he intends to go about ensuring the win on Saturday, the Argentinian explained that “I see no reason to approach the match any different to the way we approached the Bilbao game, with so much desire, the will to do things right and the motivation”. And Tata is convinced that his men are capable of getting the job done. “We have just played two games at very difficult times, and we want to get to the last game of the season with a chance of winning the title … The possibilities of that happening are not high, but they exist … Until the game with Elche, we should still have a mathematical chance of winning the league.”

Sticking to his guns

Martino added that “these players never tire of competing and winning. However many difficulties and serious situations they face, they still compete.” The manager spoke fervently in defence of the Barça style, despite one of its biggest exponents, Pep Guardiola, coming in for such criticism following Bayern’s dismal exit from the Champions League this week. “Some people sense the need to lay one style of football to rest and to adapt to the kind of football being played today” he said. “But I don’t agree with that … The comments that he and I receive cannot be compared. What he achieved is the greatest thing in the history not just of Barcelona, but of football.”

Still on the subject of the Champions League, he was asked to comment on the all-Madrid final that awaits in Lisbon, and to say which side he’d like to see lift the trophy. “The two teams that did things the best this season have qualified” he said. “I might be more inclined towards Atlético because Simeone is there, but I don’t really have any big preferences.”[[CITA_2]]

Asked about his future, he commented that “I just want to think about these two games we have left. I say two because those are the ones that can keep us in with a chance … We are always talking with Zubizarreta about the future. He hasn’t asked me to stay because I already have a contract, so there’s need for him to say anything on the matter.” And asked how his sometimes difficult experience at Barça compares to life at his previous clubs, Martino admitted that “it has been a very intense season, but I would say it has been problematic. It has been a year of learning.”

I see no reason to approach the match any different to the way we approached the Bilbao game
Zubizarreta hasn’t asked me to stay because I already have a contract, so there’s need for him to say anything