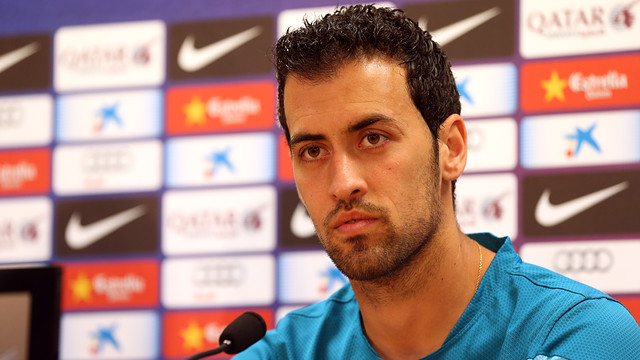 The FC Barcelona midfielder spoke to the press today, and said that “we’ll be thinking about Tito in every game we have left”

Sergio Busquets spoke to the press today, two days before another crucial league fixture, this time at home to Getafe at the Camp Nou (Saturday at 4.00 PM CET). With Real and Atlético both in stronger positions than Barça, nothing but all three points will suffice to keep the title dream alive. “We know that things are out of our hands and that it’s going to be difficult, but still have hope” he said. “We have to use every chance we have let.”

Barça will be facing Atlético Madrid on the final day, a side that is currently top of the Liga table and that has just qualified for the Champions League Final for the first time in forty years. “They are there on their own merit” commented Sergio. “They are a team in capital letters … All we can do is keep fighting to win until the last minute of the last game.”

Asked for a general review of his club’s season, he admitted that “we still have to see what happens in the league, but in terms of results it hasn’t been a good season for us.”

Last week, Barça staged a dramatic comeback to beat Villarreal, a game played when the players were clearly affected by the recent death of former manager Tito Vilanova. “We are people like anyone else and it was hard to play that game” said Busquets. “But we had to put it all behind us and go out and fight for the three points. Tito will be on our minds in all the games we have left.”