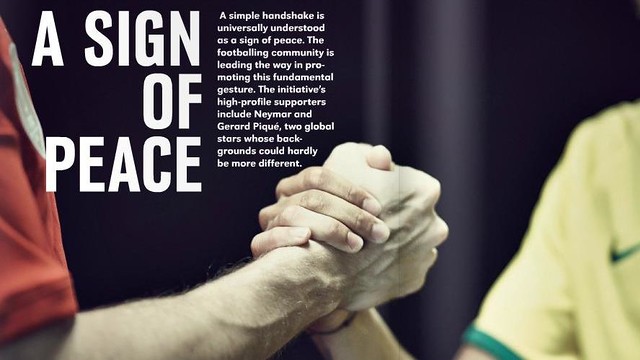 The Brazilian international told a FIFA magazine, “It’s our duty to use our popularity for a good cause”.

Piqué insisted, “I see this job as a vocation and I believe it’s our duty to fight for peace and justice wherever we go”.

Gerard Piqué and Neymar Jr are the stars of a FIFA and the Nobel Peace Centre campaign to promote equality.  The ideals of the campaign – peace, friendship and respect – are illustrated by two hands clasped in a handshake.  According to Neymar, “Football has shown me you can achieve anything in life.  You can get things moving so it’s our duty to use our popularity in a good cause”.

Piqué spoke in a similar vein.  “I see this job as a vocation and I believe it’s our duty to fight for peace and justice wherever we go.  It makes me sad to think that there are children who have to grow up without enough food, without shelter, without security.  We have to focus on finding solutions”.  The first step is a handshake between two people who are equal but different at the same time.

Neymar also reveals some personal background in the interview.  “I used to kick the ball all around the house and give running commentaries.  If I ran into the sofa I would appeal to the ref”.  Speaking about his father, he insisted, “He’s more than a father.  He’s my best friend, my life”.  And with the World Cup finals just around the corner, he is upbeat about the part he will play. “God willing, I’ll celebrate the World Cup with Brazil.  I’m determined to play a big part in making our fans happy”.

Piqué admits that he sings the Barça anthem before going to sleep and heaps praise on the Club’s youth policy.  “They guided us through the lower categories, not just as footballers.  It didn’t matter how good you were, if you didn’t obey the rules, work for the team or got big headed, you didn’t have a future with Barça.  At the age of 17, I left to grow as a person and I came back to Barcelona as a man”.

Finally, Piqué is quite sure about one thing. “When I’m old, I want to look back and remember great moments, and the World Cup will be one of them”.