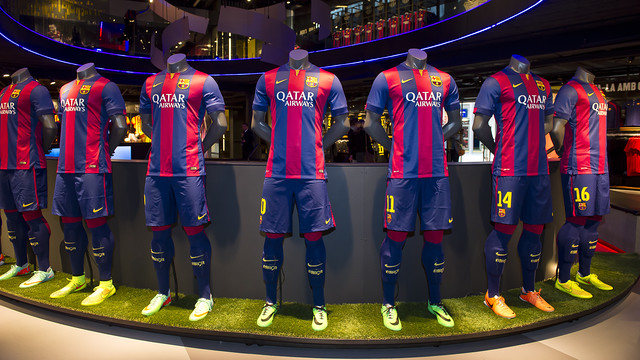 On Thursday morning, the brand new kit for the 2014-15 season went on sale in official club stores

It’s time to start thinking about the new season, and the brand new 2014-15 kit, went on sale this Thursday morning at the FCBotiga, the official club store, the day after the new ‘crafted to win‘ design was released for sale online from Nike.com.

There were plenty of people at the FC Barcelona store at the Camp Nou bright and early this morning, all keen to be among the very first to get their hands on the very latest model of one of the most famous sports jerseys in the world. The kit for the 2014-15 season, with its Nike Dri-Fit technology and   environmentally sustainable features, offers a somewhat wider version of the traditional ‘blaugrana’ stripes in slightly darker tones than usual. At the moment, the kit is only available at stores in Spain, and will go on sale in stores in the rest of the world from July 17.