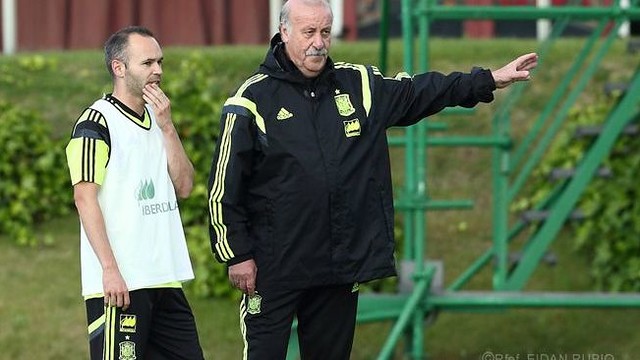 The Spanish national team, with eight Barça players, travelled to Seville this Thursday for tomorrow’s friendly against Bolivia

Cameroon faced off against Paraguay this Thursday, and lost 1-2

The World Cup in Brazil is just two weeks away and the Barça players are preparing for the big tournament with their respective national teams. Here’s a look at how the national teams are gearing up for the World Cup:

Spain: The team managed by Vicente del Bosque, which has eight Barça players in it, travelled this Thursday to Seville to face off against Bolivia. The match will be played this Friday at the Sánchez Pizjuán and it could see Gerard Deulofeu make his debut. The rest of the Barça players on Del Bosque’s team are Gerard Piqué, Jordi Alba, Sergio Busquets, Xavi Hernández, Andrés Iniesta, Cesc Fàbregas and Pedro Rodríguez.

Cameroon: Alex Song’s Cameroon played a friendly this Thursday evening against Paraguay. The African team were narrowly defeated 1-2 by the South Americans, Song started the game on the bench. The midfielder came on for Enoh on the 63rd minute when the result was 0-1. The Paraguay had taken the lead through Romero and doubled it after a strike from Santa Cruz. Cameroon within one goal of Paraguay on the 76th minute thanks to shot from Choupo-Moting. Cameroon could have equalised, but Idrissou failed to convert a penalty.

Brazil: The team managed by Luiz Felipe Scolari have started training at the installations of the Granja Comary. Barça players Neymar Jr and Dani Alves have been named to the Brazilian national team.

Argentina: The team led by Leo Messi are getting ready for the World Cup in Ezeize. The Argentinians started their preparations this past Monday. The other Barça player on the team, Javier Mascherano, talked about Argentina’s chances of winning the World Cup: “We have to improve. Being a team that’s so direct, that has so many attacking players, sometimes we suffer on defence,” he said. “We have a couple of weeks to improve and find the right balance. This time is important.”

Chile: The Chilean national team are one of Spain’s rivals in the group stage of the World Cup. They will play an international friendly this Friday against Egypt at the national stadium in Santiago, Chile.