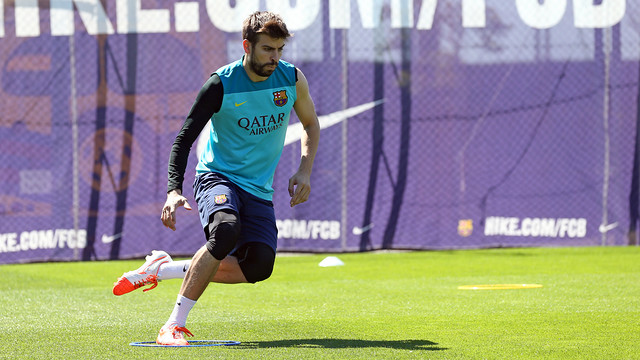 The two players are in the final phase of recovery from injury and excercised on the pitch at the Ciutat Esportiva, away from the main group

Isaac Cuenca, who played in the Catalonian Cup match, trained normally with his teammates

Barça are continuing preparations for the decisive match this Saturday at the Camp Nou, a match that will decide La Liga title. The first team trained this Wednesday, in a session led by Gerardo ‘Tata’ Martino with their minds only on the game. Isaac Cuenca, who played on Tuesday in the Catalonian Cup match in Gerona, trained with his teammates.

The novelty at the session was the presence of both Gerard Piqué and Jordi Alba on Pitch 1 at the Ciutat Esportiva Joan Gamper. The two players are in their final phase of recovery from injury, and both excercised on the pitch away from the main group, but with their eyes firmly fixed on the decisive “final” this Saturday. Neymar Jr was also around, doing some specific recovery work.

It’s worth remembering that Gerard Piqué sustained a hip fracture in the first leg of the Champions League quarter final, in the Camp Nou, against Atletico Madrid, whilst Jordi Alba tore the hamstring in his right leg in the Spanish Cup Final in Mestalla