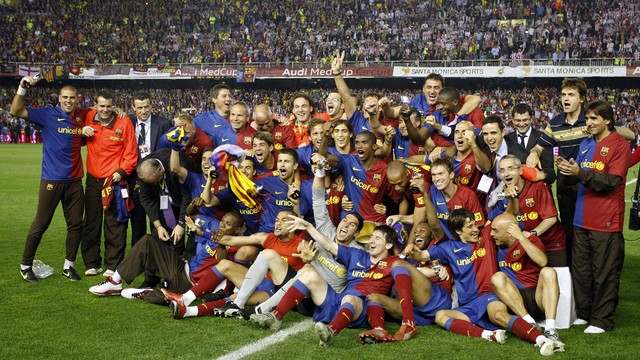 On May 13, 2009, Barça defeated the Basque team in Valencia – it was the first title of FC Barcelona’s treble winning season

This Tuesday is the five-year anniversary of the unforgettable Copa del Rey final in Valencia against Athletic Club. The month of May that year started out with the legendary 2-6 at the Bernabéu against Real Madrid and the miraculous goal from Iniesta at Stanford Bridge. The Copa del Rey final on the 13th led to the first of the historic treble for Barça that season. After the three titles were won, Barça went on to conquer the Spanish and European Super Cups and the Club World Cup – which made Barça the first and only team in football history to win six titles in one year.

A night for the history books

That evening was a true footballing party in Mestalla. Barça came into the match after nearly three years without winning a big title, whole Athletic Club hadn’t featured in a Cup final for nearly a quarter century. Excitement and a great atmosphere was had between the fans of both teams. In addition, Culés and Leones were fighting for the unofficial title of King of Cups (the team with the most Copa del Rey titles).

Athletic Club had weeks to prepare for the game, and they took the lead after only nine minutes thanks to a header from Toquero. The defensive setup from the Basque team made it difficult for Barça to create chances in the first half, but a rocket from Touré Yaya brought Pep Guardiola’s team level.

In the second half Barça were unstoppable. Messi, Bojan and Xavi closed out the 4-1 route and FC Barcelona claimed its 25th Copa del Rey title.