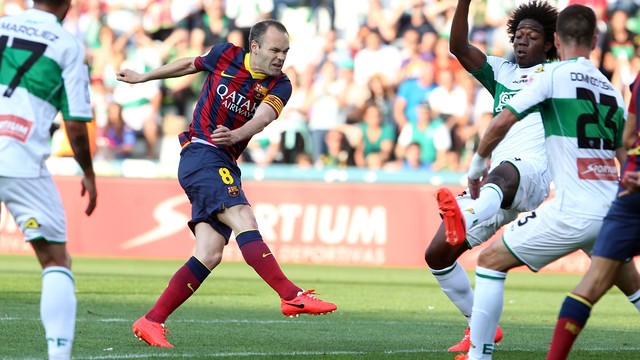 Barça dominated possession and territory against Elche, but were unable to convert that into goals

And then there were two. Atletico Madrid and Barça will fight it out for this season’s league title at the Camp Nou next weekend after both of them drew this evening and Real Madrid bid farewell to any hopes of challenging when they went down to Celta. Barça’s goalless draw at Elche was enough to keep them in with one last chance next week, with Atletico unable to get the win that would have give them the title, drawing 1-1 at home to Malaga.

Barça deserved more at the Martínez Valero against an Elche side who parked the bus and ceded control from the off. Martino’s side looked sharp and were soon sniffing a goal – Iniesta rattling the woodwork on 13 minutes and aided by Cesc in the middle, setting up plenty of chances for the always competitive Alexis.

Elche keeper Manu Herrera was kept busy by the Barça front men, cutting out a typical mazy run from Messi and then keeping out an Alexis header from the resulting corner, before pulling off  a great save from a Messi free kick which looked set to open the scoring.

The only thing missing from a great first half was a goal and just two minutes after the break they nearly broke the deadlock when Messi broke free into space and beat the last defender only for his effort to come back off the keeper’s body. It looked as if Elche were in for another tough 45 minutes, but in truth, Barça seemed to run out of gas and conviction in the second half and their hosts were even able to threaten with a couple of counter attacks.

A draw for Barça and a win for Atletico, or even a defeat for Martino’s men and a point for the Madrid side would have handed Simeone’s team the title and there were some nervous moments when on 81 minutes Elche’s Rodriguez had a good chance, shooting high when one on one with Pinto. Adriano replied with a shot that went just wide and then Messi had another chance from a late free kick, but the scoreboard didn’t move and Elche could celebrate the point that secures safety and Barça know that with Atletico’s draw at the Calderon the title will be theirs if they can beat the Madrid team next weekend.