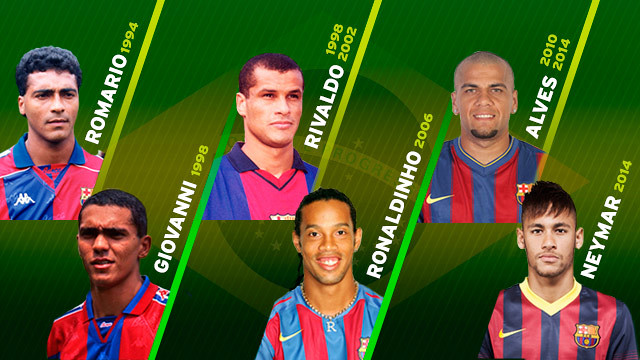 Romario, Rivaldo, Giovanni, Ronaldinho, Alves and now Neymar have all represented Brazil at the World Cup while on FC Barcelona’s books

Six players have gone to the World Cup as FC Barcelona players, namely Romario, Rivaldo, Giovanni, Ronaldinho and Alves, plus Neymar Jr, who is making his debut this year.

The first was Romario, who was at Barcelona from 1993 to 1995, and came back from the USA as world champion and as the third highest goalscorer in the competition with five, topped only by Oleg Salenko and his FCB team-mate Hristo Stoichkov, who both had six.

There were two Barça players in Brazil’s France 1998 squad, Giovanni and Rivaldo. The former was at the club from 1996 to 1999 and the latter from 1997 to 2002. Both played in the final that year, which they lost to the host nation, and Rivaldo was also there for the 2002 final in Japan and Korea, where Brazil beat Germany to win the title for a record fifth time.

The fourth on the list was the great Ronaldinho, who was in Catalonia from 2003 to 2008, and after some amazing seasons for Barça he also excelled at Germany 2006, but Brazil failed to make it into four finals in a row when they lost to France in the quarter finals.

The last two are still at FC Barcelona. Dani Alves played at South Africa 2010, where Holland knocked his side out in the quarter finals, and will be returning to the World Cup this summer in his home country, joined by Barça colleague Neymar, who is playing at the tournament for the first time.