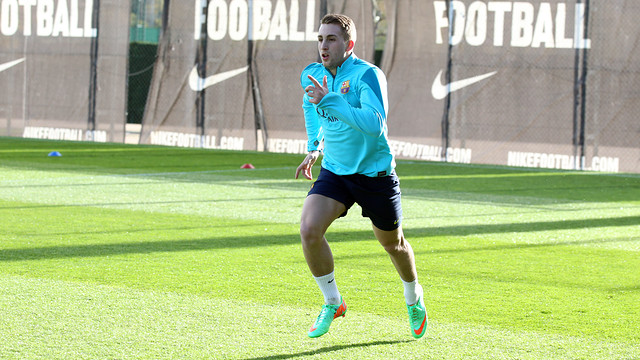 Aged 20 years and two months, Deulofeu could become the second youngest Barça player to play for Spain after Bojan Krkic

Xavi and Sergio Busquets made their debuts just before turning 21, Piqué, Bartra and Iniesta when they were 22 and Pedro when he was 23.

If Gerard Deulofeu plays against Bolivia in Spain’s friendly on May 30, he’ll become the second youngest Barça player to play for the Spanish national team, behind Bojan Krkic, who made his debut aged 18 in 2008.

The Catalan winger played 29 games with Everton last season and was recalled to the Barça first team squad by Luis Enrique after a year’s loan at the Toffees.

Vote of confidence from Del Bosque

Spanish coach Vicente del Bosque unexpectedly called up Deulofeu on Sunday, even though he wasn’t in his original provisional 30 for the Brazil World Cup,explaining: “we have a lot of confidence in him, he did really well at Everton and he’ll be a good solution for us if anyone gets injured”.

One of the youngest

Bojan Krkic is the youngest Barça player to debut with Spain, having been called up when he was just 18 in 2008. Deulofeu will be just 20 years if he plays on Friday, compared to Xavi and Sergio Busquets, who made their debuts just before turning 21, Piqué, Bartra and Iniesta who were 22 and Pedro, who won his first  cap when he was 23..