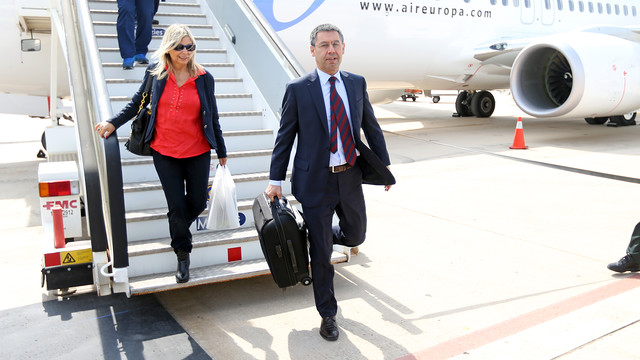 After the conclusion of the penultimate round of La Liga in which Barça and Atlético secured a point apiece in their respective matches, President Josep Maria Bartomeu said, “we suffered, but we’re happy and satisfied.” With the combination of the aforementioned results, Barça will have the chance to win the league at the Camp Nou next Saturday. “It will be a final,” said the president. “We deserve it and we will fight for it.”

Speaking to Barça TV, President Bartomeu called on the Camp Nou faithful to attent Saturday’s match en masse: “I encourage everyone to come to the stadium. It will be difficult (to win) but we will fight.” Bartomeu also said that he believes in this team: “Like all Culés, I have a lot of confidence in the players.”

Zubizarreta: “We achieved our goal”

After the 0-0 draw with Elche, the Club’s Director of Football Andoni Zubizarreta said that “we came here with the objective of reaching the last match of the competition with chances of winning the title, and that’s what we’ve done.” He added: “The final 15 minutes seemed short and long at the same time. Shot because we wanted to score, but time was running our, and long because the end of the match at the Calderón never seemed to come.”

Zubizarreta expects a heart-stopping match on Saturday, but he’s thankful that it will be played at the Camp Nou. “Atlético are a tough team, very demanding. They force you to play very concentrated. We’re playing for it all at our stadium, with our fans, after a very complicated year.”