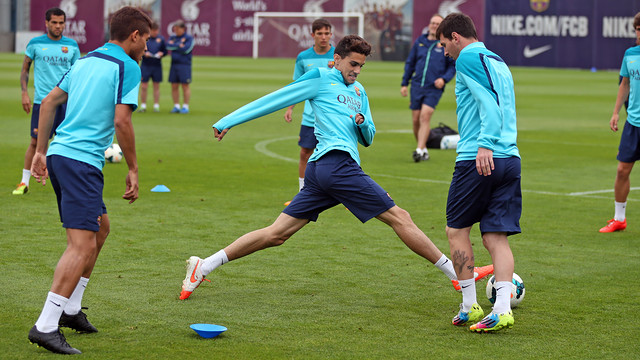 Masip, Gómez, Grimaldo, Lucas, Babunski, Nieto, Bedia and Sandro, from Barça and Munir, Ros and Quintillà from Youth A joined in the training session

Barça continued with their preparations for Saturday’s title decider against Atletico Madrid, as the team trained under Gerardo ‘Tata’ Martino at the Ciutat Esportiva Joan Gamper this morning- All 20 available players were at the session, with Gerard Piqué and Jordi Alba again training apart as they bid to be fit for Saturday’s game.

Neymar Jr, who’s been out injured since he damaged a toe in the Spanish Cup Final on April 16, again did some specific training.