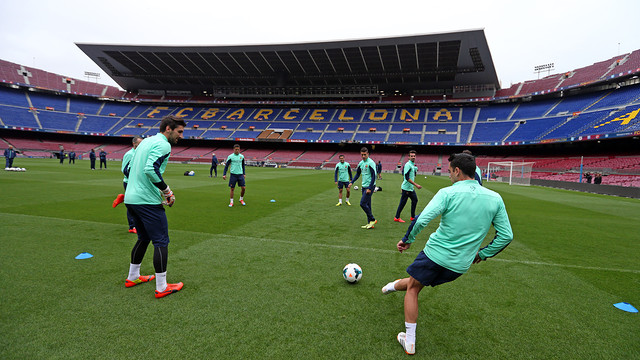 The players have had their final training session ahead of tonight’s match in the Camp Nou against the in-form Basques (9 pm, Canal+)

The players had their final training session this morning ahead of tonight’s match in the Camp Nou against high-flying Athletic Club (kick-off 9 pm).  Manager Gerardo ‘Tata’ Martino took charge of a group of players that included young defender Sergi Gómez, and winger Isaac Cuenca.  Tonight’s match is the first of five must-win games remaining in the race for the La Liga title.

Puyol has been rested as a precaution while Valdés, Piqué, Neymar Jr and Jordi Alba are all sidelined by injury.  To add to the manager’s woes, Sergio Busquets is suspended.

After the training session, the players were taken to their hotel where they will remain until tonight’s match.