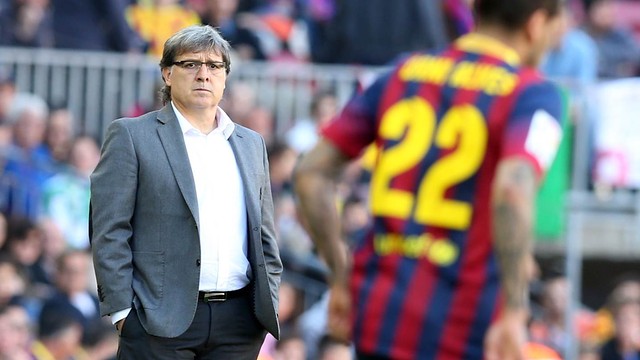 The upcoming Champions League game was heavy on the minds of the players this Saturday at the Camp Nou. “In a sense I was expecting today’s match to not play out like our previous ones. For once, I’m going to focus 100% on the result, not how we played,” said Tata Martino, who added: “I don’t want to make excuses. The feeling that I have is that in between the game this past Tuesday and the one next Wednesday this match against Betis snuck up on us. We needed to win in order to continue putting pressure on the leaders.”

The FC Barcelona manager explained that an earlier goal could have changed how his men played, but the fact that the opener was scored later on complicated the match: “We started playing more slowly than we needed to after the 25th minute. We probably won thanks to the talent of the players.” He added: “I don’t think it’s a question of concentration or underestimating our opponent, they played a good game.”

“I wanted to rest some of the players ahead of Wednesday’s game against Atlético if today’s game had gone differently. It didn’t play out that way,” said the manager. “I probably could have given more rest to some of the players who featured on Tuesday. Perhaps I didn’t go far enough with the rotations,” said Martino, who went on to praise Bartra and Busquets: “He’s an exceptional footballer, perhaps it’s taken too long for him to get recognition. For me he’s a key player for Barça. I’m surprised he isn’t selected more often for all-star teams.”