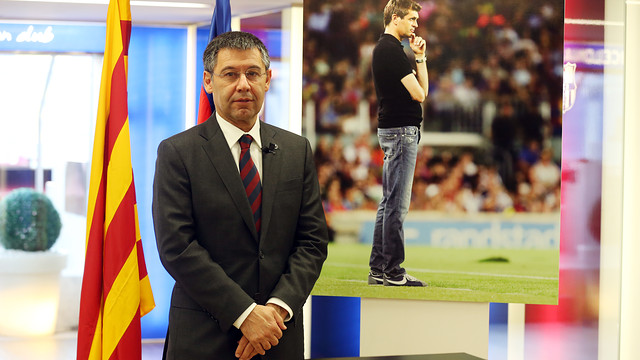 I want to address all those who love Barça, because it is part of us and makes us feel alive. In moments of joy for the successes, but also, and perhaps especially, in hard and sad moments of defeat and in the moments when news that shatters the heart hits, as is the news of the tragic death of Tito Vilanova.

I want to talk you about Tito because remembering him is the best consolation we can have and the best tribute we can pay. I have had the good fortune to talk about football and life with him, to share moments I will always remember, and I would like highlight a deeper aspect of his character and personality, which is an example for all.

Tito was a loved man. He has always been proud of being from ‘the country’, from “Empordà ” as he often emphasized; a simple, discreet man that looked you in the eye and talked straight. He did not have to work hard to be liked, he was his own man, and that’s what was most attractive to those who knew him. Maybe Tito was much more sensitive than it showed, because what was conveyed assertiveness that left no one indifferent.

This unifying capability, this spirit which made him have a good relationship with everyone, leaves us a life lesson to all Barcelonistas.

We have learned many things thanks to Tito. His humility and discretion, uncommon values in the world of football today. His perfectionism and his penchant to demand the most of himself was a source of inspiration for all who have worked with him. I remember that he required the Camp Nou’s pitch to be like a perfect carpet! He did not care if need be persistent if it was necessary, because he fought for what he believed with the same enthusiasm he put into his own work.

He grew up at La Masia and deeply believed in its values and principles. He knew, because of personal experience, that footballers’ dreams do not always come true at FC Barcelona, but he also knew that these disappointments help you grow.

He watched his son Adrià, who has the same enthusiasm and dreams he had at his age, when he entered the club as a teenager and left a man and a good person. Perhaps that’s why he always had an eye on the youth teams and was a great supporter of the youth system. La Masia was always one of his major preoccupations as the Barca coach .

When he took over the first team, Tito spoke words that could not have been more true. “I am equally or more prepared than any coach that comes from outside because I understand the way we play and how we view the game.” He said it with perfect conviction and the belief that he could keep the team on the course of success that it had enjoyed in previous years. And that’s what he did while in good health.

He had clear ideas, knew what he wanted, and knew what he had to do at all times, and always found solutions to everything. He was a born organiser, a quiet leader who did not hesitate to execute his plan. Tito was never a striker, but was always led the charge.

Fate played a cruel game with him. The disease against which he courageously fought with determination was the only opponent that could stop him from enjoying his dream.

But Tito never stopped caring about the club even in the most difficult moments of his personal fight against the disease. I have experienced firsthand how he helped the Club with advice up until his final moments. “We have to do this … You want me to help you do that? ” he told me few days ago.

Tito has left us, but his memory certainly makes us more human and better Barcelonistas. Therefore, on its merits as a coach, but above all, by his example as a person, he will be part of our history and someone we eternally look up to.

I want to end this letter by thanking his wife, Montse, and their children, Carlota and Adrià , for the way you have loved and cared for Tito. You will always be at the heart of all Barcelonistas.

And thank you, Tito ,for all you have given us. Thanks for making us stronger.

PS Don’t worry Tito, we will continue to take care of the pitch just the way you liked it.