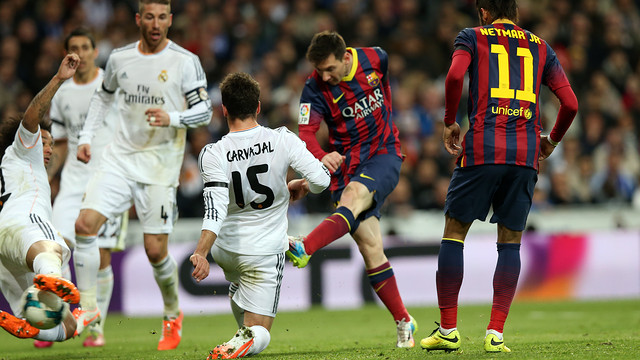 It’s 63 days since FC Barcelona beat Real Sociedad in the semi-finals. Tonight Mestalla hosts the Spanish Cup Final and the Catalans face old rivals Real Madrid. It’ll be a peculiar final. There is no clear favourite, both sides are missing important players to injury, and for the first time in several years, these two teams are not the runaway leaders in La Liga.

Barça come into the game following a disappointing week in which they were knocked out of the Champions League and suffered a serious setback in their quest to win La Liga. Real Madrid would appear to be heading in the opposite direction. Not without difficulties, they came through their European quarter final against Dortmund and following two consecutive defeats, have got back into contention for the league championship.

It all means that the situation is not unlike it was prior to Barça’s impressive 4-3 win at the Santiago Bernabéu. Before that match, they had just lost at Anoeta and Valladolid, but then took all three points in one of the most action-packed clásico encounters in recent memory. Barça also won when the sides met earlier on in the season, 2-1 at the Camp Nou.

It’s hard to work out which side is best positioned for the cup final. Barça have just suffered important defeats in the other two competitions, but have still had the upper hand over Real Madrid in head-to-head meetings this season.

Things are made all the more uncertain by the absence of several key players this evening. Gerardo Martino has been missing Valdés, Dos Santos and Cuenca for some time, while no fewer than three centre backs, Piqué, Bartra and Puyol, are all last-minute doubts. Without them, there is a serious lack of defensive resources in his squad.

But Real Madrid have problems of their own. Superstar striker Cristiano Ronaldo is very unlikely to play any part in the proceedings, and it doesn’t look like Marcelo or Khedira will either, while there are also doubts concerning the fitness of Sergio Ramos. More long-term absentees Arbeloa and Jesé are also out of the equation.

Barça, with 26 wins, is the club that has won this trophy the most times, while Real Madrid hold the record for the most finals, 38. It’s a repeat of the final of three years ago, which was also played at Mestalla, and was decided by a Ronaldo goal in extra time. Now is Barça’s chance to set the record straight.