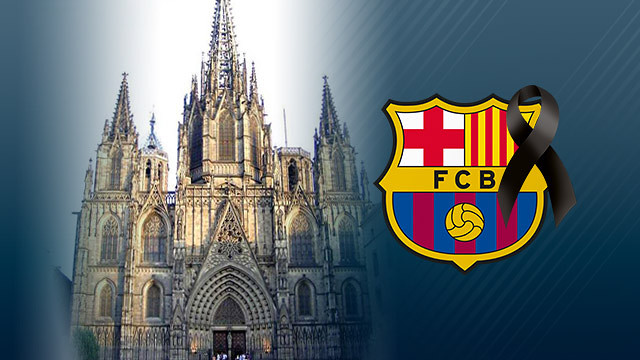 The Memorial Ceremony for Tito Vilanova, who died on March 25th 2014 at  the age of 45 from  Barcelona Cathedral. The Archbishop of Barcelona,Lluís Martínez Sistach, will officiate at the ceremony.

Tito Vilanova was the manager in FC Barcelona’s record-breaking season of 2012/13, when the team got 100 points in the league, and contributed to the greatest Barça team of all time as assistant coach to Pep Guardiola. He won everybody’s admiration for his achievements in the football world, and later for his immense courage in the final years of his life.

Barça in his heart

Vilanova was brave, honest, hard-working, perfectionist, methodical, pragmatic and intuitive on both a personal and a professional level, and always remained loyal to the club and to himself, as defined by two of his companions from his youth right through to his managerial days, Jordi Roura and Aureli Altimira.

Tito Vilanova came to the club at the age of 15, when he came on trial from UE Figueres in the 1984/85 season.

He had just turned 16 when he stepped into La Masia for the first time, and remained there as a resident until June 30, 1989. It was there that he forged a close friendship with Guardiola, Jordi Roura and Aureli Altimira, with whom he would later share so much success on the Barça coaching staff.

‘The Marquis’, as he was known at the time, was a tall, lanky midfielder, with exceptional skill, especially renowned for his free kicks and how he read the game. As a Barça player, Tito featured in two friendlies for the first team in 1989 and later played for Figueres, Celta, Badajoz, Mallorca, Lleida, Elche and finally Gramenet, where he retired from active duty.

As a coach, Vilanova was analytical, cerebral and observant and was famed for the amount of gestures he used make as he directed his teams. Those that worked alongside him considered him a tactical genius in a job for which his nature could not have been better suited.

He first started coaching at FC Barcelona in charge of the U14 team that included future stars like Gerard Piqué, Cesc Fàbregas and Leo Messi. After that, he coached at Palafrugell, Figueres and Terrassa.

He returned to FCB in 2007/08, this time as assistant manager to Pep Guardiola with Barça B, who he helped guide to promotion up to Division 2B.

The year after, the Guardiola-Tito tandem took over the first team, and led it to fourteen major titles in four years. The team rewrote the record books in 2009 by winning all six trophies at stake: the Champions league, La Liga, the Spanish Cup, the Spanish Supercup, the European Supercup and the Clubs World Cup.

On April 27, 2012 Tito Vilanova was the natural choice to take over from the departing Pep Guardiola as FC Barcelona first team manager. Director of Sport Andoni Zubizarreta considered it the natural progression and the best way to continue Pep’s legacy, and his choice was fully supported by then president Sandro Rosell and the rest of the Board.

The results showed that this had been a wise decision, for Barça won the league. They dominated the championship, leading the table from the very first day and getting 100 points out of a possible 114 to equal Real Madrid’s record from 2011/12. The team also set a new goalscoring record with its 115 goals in 38 games, an average of three goals a game.

The total of 32 wins, four draws and just two defeats, eventually beating Madrid by 15 clear points, are testimony of the outstanding job that Tito Vilanova did as manager of FC Barcelona that 2012/13 season. Barça’s 22th Liga, that of Tito and Abidal, will never be forgotten. What’s more, the team reached the semi-finals of the Champions League and the Spanish Cup, narrowly missing out on a place in both finals.

His achievement won him plenty of individual accolades. In 2013 the ‘Marca’ and ‘Mundo Deportivo’ newspapers both named him manager of the year. Bayern Munich manager Jupp Heynckes was invited to present the Catalan paper’s award, which was collected on his behalf by Zubizarreta. In his speech, Heynckes spoke emotionally about Vilanova, saying that “under Tito the team has played fantastic football, like in other years. Tito is a great football strategist. He’s hard-working, reserved and valiant, and has a direct, fluid relation with his players. He has a positive sense of human values. He has not only set an example for the sporting world, but for the world in general with his outstanding elegance. I wish him all the luck he deserves. He’s a champion of sport and of life.”

Unfortunately, the illness announced on November 22, 2011 brought an early end to the dream of managing the team he held so close to his heart. He was unable to dedicate his full effort to the task in the 2012/13 season, and at the start of the following campaign, it was announced on July 19, 2013, that he was not well enough to continue in the position.

On April 25 2014, at the age of 45, Tito passed away after a long struggle against the illness which was first diagnosed two and a half years earlier.