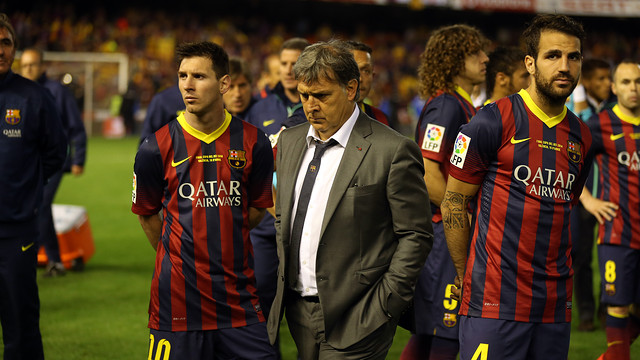 The manager, who is saddened by Barça’s defeat, says that “it’s a very difficult blow because our expectations were high”

After the Copa del Rey final against Real Madrid, Gerardo Martino said that the team “must continue forward and keep on fighting for the league” and added that “it’s a very difficult blow because of our expectations. We wanted to win. What I’m taking away from this match is the team’s intention.”

The Argentinian manager went on to say that the fans cheered on the team and that he’s “deeply saddened by the defeat” and that he “feels bad for the fans who came to support the team. Barça have a lot of positive things to accomplish.” On a positive note, the manager praised Marc Bartra: “He’s shown that he can make a spot for himself in the first team. Despite losing the final, the fact that he’s consolidating himself is a positive thing.”

When asked about the future of the team, Martino said that “we have to derive strength where there is none. We have the obligation to continue fighting until the final moment” and he went on to analyse how his team performed: “Barça have a way of playing that is hard to modify. There are no long balls for a pure number nine, we’re a team that passes the ball, elaborates plays and when we aren’t precise in finding space the game becomes uncomfortable for us. When we don’t score first things get complicated.”

Finally, Martino lamented his team’s lack of accuracy: “We lack accuracy in the final 20 to 25 meters.”

“We have to persist with our ideas”

The football director, Andoni Zubizarreta, talked about Barça’s defeat in the Cup. “We tried to score until the end, and we nearly did it,” he said. Zubizarreta went on to say that “we played up until the 93rd minute to win. The first goal hurt us, as it forces you to play from behind.” Lastly, the football director reflected: “There are moments when you work very hard but you don’t get the results.”