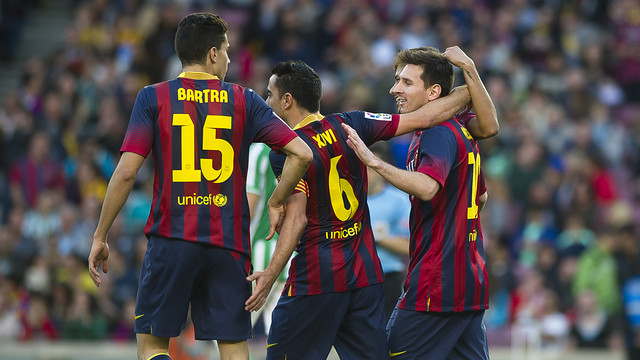 Only a win will suffice for Barça tonight against Athletic Bilbao at the Camp Nou. After losing in Granada last week, Barça are now seven points behind leaders Atlético Madrid (who already played on Friday night, beating Elche 2-0), and one behind Real Madrid (whose game with Valladolid has been postponed until May 7 because of their Champions League commitments). It’s time for Barça to start making amends not only for the setback in Andalusia, but also for being knocked out of the Champions League and losing the Spanish Cup Final – their first run of three consecutive defeats for eleven years.

Manager Gerardo Martino already admitted in his pre-match press conference that “any mistakes in these last five matches will be the end of it. But the team will not give up”.

However, the Argentinian is faced with all kinds of difficulties. Both Neymar and Jordi Alba suffered injuries in the cup final, Puyol has also been forced out after sensing knee trouble in training on Thursday and Busquets is suspended. With Valdés, Piqué, Cuenca and Dos Santos also out, reserve team centre back Sergi Gómez has been drafted in as a replacement.

Athletic Bilbao are having a fine season, fourth in the table and looking strong candidates to grab the Champions League qualifying place. Ernesto Valverde’s side also have an impressive away record, with not one defeat on the road since January 5, and midfielder Mikel Rico is their only major injury concern.