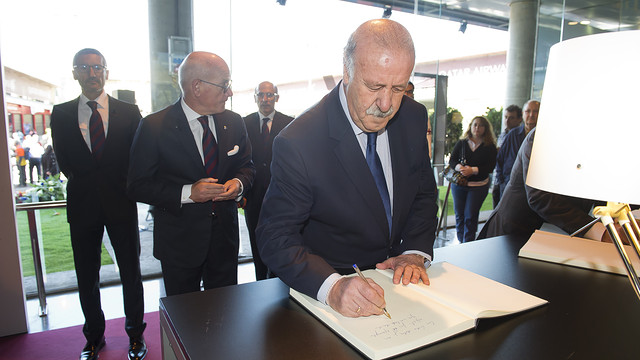 12,068 people had visited the remembrance space at the Camp Nou between nine o’clock this morning and midday

A further 20.802 people paid their respects on Saturday

The remembrance space for Tito Vilanova at the Camp Nou opened its doors at nine o’clock this morning and following the 20,802 visitors who paid their tributes on Saturday, Barça fans again responded massively, with 12.068 more visitors by midday. The space will remain open until three o’clock this afternoon.

Once again, the Barça family has been paying homage to Tito Vilanova, with many figures from the footballing and Catalan civic world also coming to the remembrance area at the Camp Nou. On Saturday, the Club’s handball and roller hockey teams offered their condolences and this morning it was the turn of the basketball squad before their game against Fuenlabrada at the Palau. The recently crowned European Futsal Champions also visited, coming to the Camp Nou as soon as they arrived in Barcelona. The team were received by President Josep Maria Bartomeu and were cheered by supporters as they left the Main Stand.

Emotional visit from Juvenil B

The Club’s Youth B team – in which Tito’s son plays – coached by Javier García Pimienta alos paid their tribute and visited the remembrance site, as did the Youth A side with coach Jordi Vinyals.