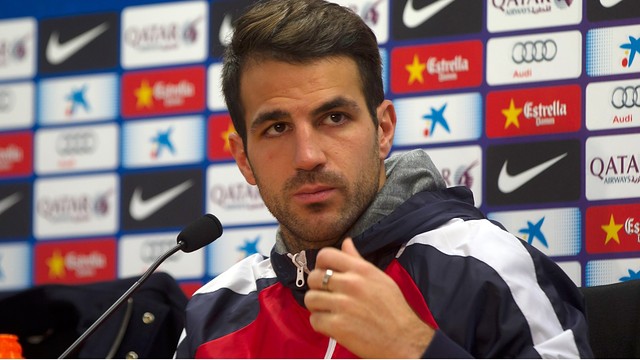 “We have to be Barça, valiant, score goals and be solid all over the pitch,” said the midfielder

In the pre-match press conference ahead of the Champions League quarter-final, Cesc Fàbregas was optimistic about his team’s chances of progressing after the 1-1 draw at the Camp Nou. “We have the weapons, talent and technique to beat them,” he declared. He added: “We’ve been working hard and we’re ready to compete. The team is very motivated and ready, I’m sure we’re going to have a good game.”

According to the midfielder, “Atlético are one of the strongest teams when they are trying to preserve a 0-0. They close their lines, and they know what they’re doing.” He admitted that the four previous games between the two teams have been “tough and even” and that he doesn’t expect tomorrow’s game to be any different. “They have a small advantage thanks to the 1-1 from the first leg. We have to start the game with our heads held high and compete well. We want to bring joy to our fans,” he said.

“We have to be a great Barça”

Cesc was clear: “We have to be Barça, valiant, score goals and be solid all over the pitch. We have to be a great Barça in order to get to the semis.” He added: “We’re fighting on three fronts and we will fight until the end. Tomorrow is a crucial game.”

When asked about his personal performances, the midfielder said: “I really want to step up. I have had small problems this month but now I’m as strong as ever.”