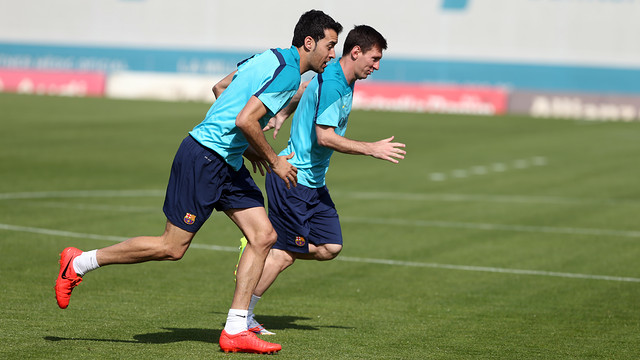 Gerardo Martino has named 18 players for Saturday’s game at Granada (8 PM CET). Centre back Marc Bartra pulled his right hamstring in training this morning and although the injury doesn’t seem too serious, he is being rested this weekend as a precautionary measure. The injured Jonathan Dos Santos, Víctor Valdés, Gerard Piqué, Isaac Cuenca and Carles Puyol also miss out, while there is no room for Ibrahim Afellay either.

Before Martino named his squad, there was a training session at the Ciutat Esportiva. Isaac Cuenca worked with the main group, but Carles Puyol and Gerard Piqué did specific exercises on their own.

The team will fly south to Granada on Saturday morning. They’ll get some rest at the Hotel Abades Nevada Palace before being transferred to the stadium shortly before kick-off.