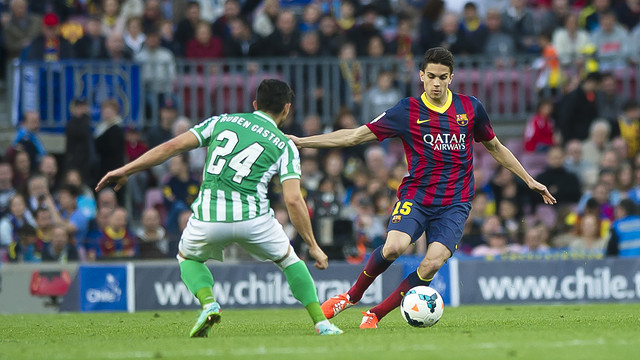 The defender laments the injuries picked up by Piqué and Valdés, but warns that their absences should not be used as an excuse

The defender Marc Bartra attended the mixed zone after Barça’s 3-1 victory over Betis this afternoons. “We got a good result against a Betis team that was brave. We know the fans are on our side and that they want the team to perform well.” The Catalan went on to lament the injuries picked up by Víctor Valdés and Gerard Piqué, but he noted that their absences should not be used as an excuse: “We’ve had bad luck with injuries, but this group has shown that it can overcome delicate situations; we must overcome this and do our best.”

Bartra’s focus in solely on the Champions League match against Atlético Madrid. “I’m very optimistic, we’ll go all out at the Calderón with the hope of going through to the next round.”

Mascherano focused on the game

The Argentinian center back admitted that it’s difficult for the players to isolate themselves from off-the-pitch affairs at the Club, but he insisted that the only thing they can do is play football: “We play the game, this group of players has experienced nearly every kind situation, but the team needs to try to show what Barça is through football. Everything else isn’t our concern.” Mascherano went on to say that Barça weren’t at their best against Betis, but that winning the three points was crucial: “We put in a big effort on tuesday; sometimes you don’t have the best of games and you run risks when you don’t kill a game off. It’s important to learn from games like this one.”

Mascherano added: “The fans aren’t used to games like this one, but they are the ones that pay to come into the stadium and, therefore, they can demand that we play well.” The Argentinian is optimistic about Barça’s chances of winning titles this season: “We have the chance to win it all and we won’t give up despite what’s happening at the Club.”

The following are statements made by Pedro after today’s game:

“We lacked intensity and control in the second half. We should have dominated more; we let them back into the game and they made it complicated for us.”

“We’re pleased with the result, and we’re happy to have three more points.”

“We try to win all of our games. We’re aware of what’s on the line both for us and for the teams we face.”

“The remaining league games will be very difficult.”

“We’re trying to isolate ourselves from what’s going on at the Club, we’re focused on our work.”

“Diego Costa is a very good player and fundamental for them, but if he doesn’t play they have other options.”