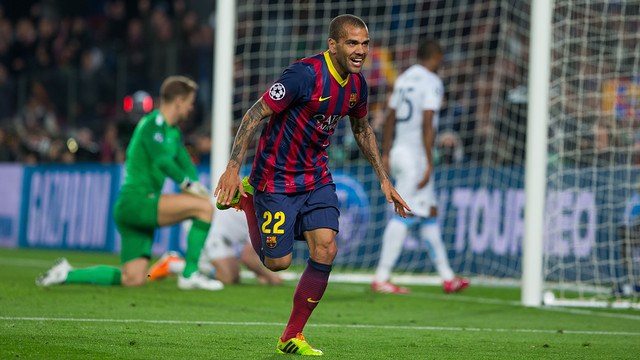 The Brazilian has featured in 293 official games for the first team, he’s only surpassed by Leo Messi (421)

This Sunday Dani Alves became the second foreigner with the most games played for FC Barcelona in the history of the Club. Against Athletic Club, he played his 293rd game with the first team, beating out Phillip Cocu’s mark of 292. Only Leo Messi, who has played 421 games for the team, has more games with FC Barcelona than the Brazilian.

In these 293 matches Alves has scored a total of 20 goals, a notable record if we take his position on the pitch into account. His most memorable goals are most likely his goal against Madrid in the quarter-finals of the Cup in 2012 and his two goals against Manchester City this year.

Barça’s No.22 is currently on his sixth season with the Club, the same amount of seasons Cocu was at Can Barça. In these six years he’s won 16 titles: 4 Ligas, 2 Champions Leagues, 2 Cups, 4 Spanish Super Cups, 2 European Super Cups and 2 Club World Cups.

Even if he features in all of Barça’s remaining matches this season, this year will be the season in which Alves has played the fewest amount of games since he arrived at the Club. A small muscle tear in his right leg caused the player to miss seven games earlier this season.