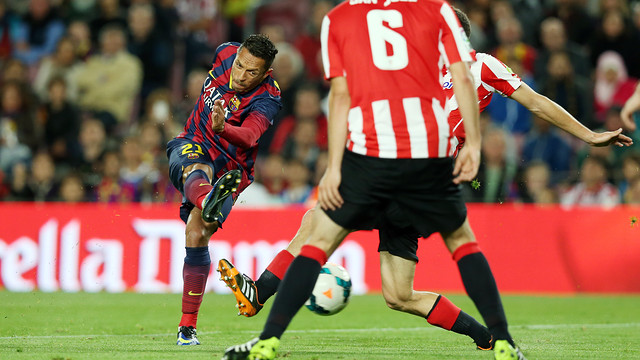 Barça’s defender, Adriano Correia, talked to the press after the team’s hard-fought win against Athletic Club (2-1) and he acknowledged that the team needed to win: “I would like to congratulate the whole team because we managed to secure an important victory.” Adriano went on to say that the players gave it their all in the match against the Basque side: “This is a victory won with the heart, with our self-esteem, we left everything we had out on the pitch.”

The Brazilian admitted that it wasn’t an easy game for the team, and it became even more difficult when Athletic took the lead: “the game didn’t get out of hand today, we came into this match after having lost a final, but we fought until the end and we managed to comeback against a very difficult rival.” Adriano also confirmed that the team will not throw in the towel for La Liga: “We have to fight while we have a chance of winning the title, we also need a little bit of luck – our two rivals have to drop points.”

The following are statements made by some of the players after the game:

“I think we played a good game, we created chances, but it’s been difficult for us to score and take the lead.”

“I think that this is the right attitude for the team to have for the rest of the season, it’s the only way we can continue hoping for the title – we’ll see what happens.”

“Being criticised is part of our job, we have to be as professional as possible.”

“We have to hold onto the hope of winning the title. We have to win our matches and hope for the rest to drop points.”

“We can’t change the way we play.”

“We’re winners, we should have killed the game off much earlier. We had chances but we missed them.”

“It’s getting difficult for us to take the lead, but we did a good job.”

“We believe that the title is possible, we have to win the rest of our matches and wait.”

“We fought back and we got a well-deserved victory, we still in the fight for La Liga.”

“We try our best to please the fans, make them proud of the team, but the fans show what they feel and what we have to do is turn those negative feelings into positive ones.”

“Messi never left, he never hides from anything, he always wants to help the team and be decisive, but it’s on everyone when things don’t go well, the same as it should be when things go well.”

“We committed an unpardonable error against Granada, now we have to wait for our rivals to drop points.”

“Anything can happen, our rivals have a lot at stake these next couple of days, but it would be unpardonable if we didn’t take advantage of their possible future errors.”