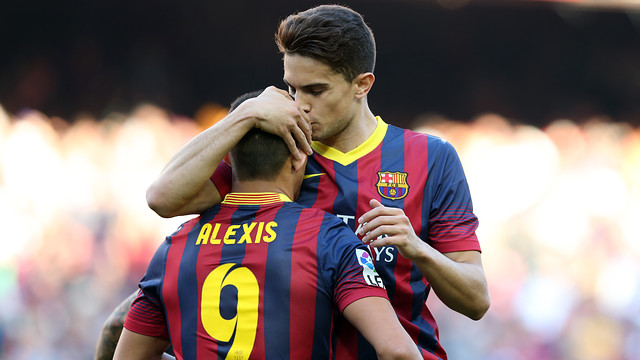 The center back, who started against Osasuna, is pleased with how his team played and he says he’s ready for next Sunday’s Clásico

It was an exhibition and a total rout of Osasuna (7-0) this Sunday afternoon in Barça’s return to La Liga after Champions League play this midweek. The Blaugrana, who qualified for the quarter-finals of the European competition on Wednesday, recovered their best form in La Liga. “I’m very happy with how the team played. We are where we have to be,” said Marc Bartra, who started against the Navarre-based team. “In these matches you have show your rival that they don’t have a chance,” he added.

“We were aware that a win today would give us tranquility ahead of the Clásico,” he indicated and he added that one can never lose focus because then bad “things happen.”

When asked about his personal performance, the center back said, “I love defending and keeping tabs on when to recover the ball. That’s my job.” He then went on to praise Leo Messi: “He’s spectacular. I have no words, every day he breaks more records.”

Alexis Sánchez gave the assist for the first goal of the afternoon and he was on the receiving end of the final pass when he scored the second goal against Osasuna. The Chilean once again showed that he’s on form and at the end of the match he declared that Barça won’t back down from any fight: “We’re in the fight for La Liga. We will try to defeat Madrid.”

The forward also believes that “both teams are worldwide football powerhouses” but that the objective for Barça “is to go there and win.” He also had words of praise for Messi: “I’m very happy for him. He’s a great player and I hope he continues like this.”