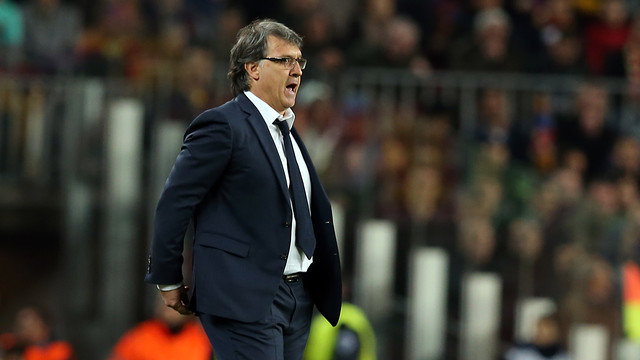 “We’re prepared to play any team,” says the manager, who adds “we need to be very strong for the remainder of the season”

Gerardo Martino talked to the press after this evening’s game against Manchester City, and he noted that his men are “ready to play against any team” and that “we once again have confidence in ourselves and in our chances (of succeeding this season). We have to be very strong for the rest of the season.”

In addition, Martino praised Neymar’s effort to help out on defence: “Neymar is very committed to the team, he did a great job defensively. In the first half he had two really good chances, and his reincorporation into the team means that he’s not yet ready to play 90 minutes.”

“In Valladolid we were missing our football, not our intensity. In the same way we showed a bad version of ourselves, today we salvaged the impression we left in Valladolid. If we had found the necessary consistency, perhaps today we were be in a better position in La Liga. The team goes through ups and downs and we’re at a point in the season where we find ourselves with less tranquility than we had hoped to have,” explained Martino, who added that Manchester City had control of the game “in the beginning of the second half.”

Praise for this players

When asked about his players, Martino praised each and every one of his men. “Iniesta has been one of the most consistent players of the second half of the season,” said Tata, who also had words for Mascherano and Valdés: “Mascherano has a way of playing that makes it difficult for him to have mistakes in games. He was once again one of the best players on the team. Valdés has been very decisive in many matches this season. In the same way that the keepers at Madrid, Bayern and Atlético have been.”

On Manchester City, a team that played well in both legs of the knock-out round, Martino said that “they were tough. They are good collectively and individually. If we’re capable of playing like this (against City) it’s clear that we can do it against our upcoming rivals. We’re prepared to go up against any team.”