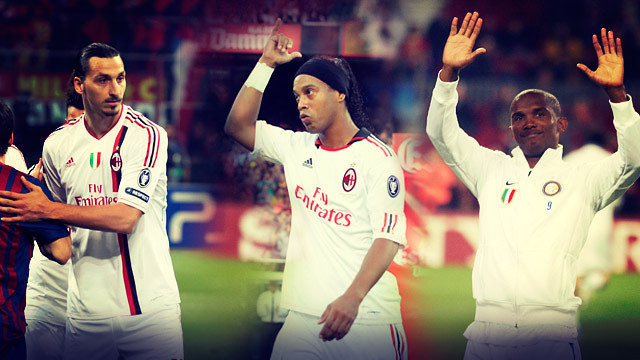 Ronaldinho, Eto’o, Ibrahimovic, and Villa are some of the latest most charismatic former players who came back to the Camp Nou com as rivals

Touré Yayá is coming back to the Camp Nou this Wednesday, three and a half seasons after his last game in a Barça shirt, the Barça v Valladolid game that sealed the League Title in the 2009/10 season. Touré, one of the main Manchester City stars, played three seasons for FC Barcelona (2007-10), and won two League Titles, one Champions League, one Spanish Cup, one World Club Cup, one European Supercup, and one Spanish Supercup.

Touré Yaya’s visit to the Camp Nou is just another return of a charismatic former Barça player. In 2009, 5 years ago, Samuel Eto’o returned, just a few months after winning the Champions League in Rome. He did it wearing an Inter Milan shirt, and was giving a great reception from the Barça crowd.

A year later, in the Joan Gamper Trophy match, it was Ronaldinho who came to the Camp Nou as a rival. The Brazilian,  then with AC Milan, was also given a great reception by the Barça fans.

In 2012 it was the return of Zlatan Ibrahimovic. The Swedish player, a Barça player for one season, came back to the Camp Nou for the return leg of the Champions League quarter-final of the 2012/13 season, as an AC Milan player. On that day Maxi López  also played the final minutes of the game.

A similar case was that of Bojan Krkic, who also came back to the Camp Nou as a player on loan to AC Milan. It was on the 12th of March 2013, when FC Barcelona turned around the result of the first leg of the Champions league last 16, with an unforgettable 4-0 scoreline. Bojan played the last 15 minutes of that match.

The last charismatic former Barça player to come back to the Camp Nou was David Villa. Villa, now at Atlético  Madrid, came back to the stadium for the return leg of the Spanish Supercup. Just like all the others, he left Barcelona having been unable to beat his former team.