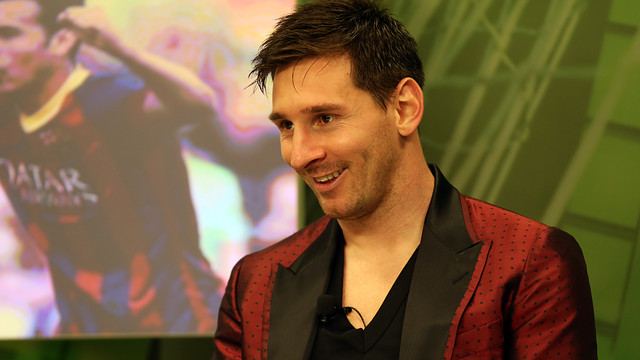 Leo Messi, the standout player in the 7-0 rout of Osasuna, visited the set of Barça TV’s ‘El Marcador’. The Argentinian, when asked about his most recent feat of breaking Paulin Alcántara’s goalscoring record, responded with his usual modesty: “The important thing is for this team to continue making history. These players have won everything and they deserve to keep on doing important things.” Messi admitted that he knew that he was close to Alcántara’s record and that it’s an honour “to be part of the history of such a big club.”

FC Barcelona’s No.10 said that he’s “pleased” with how well the team played: “After our good performance against City we had to once again play well in La Liga and luckily it worked out perfectly.” He added that these past two matches “should help us gain confidence” especially after last week’s defeat at the Nuevo José Zorrilla. “After the game against Valladolid we were harshly criticised. We were the first to know that we didn’t do a good job and that we needed to win if we wanted the title – we knew what was at stake.”

The next challenge is a do or die match at the Santiago Bernabéu. “We hope to show our best version and get a good result that lets us keep on fighting for La Liga,” he said. “It’s an opportunity to get close to Madrid. It’s very complicated because we’re the visitors and we’re going up against a great team, but we will try to win.”