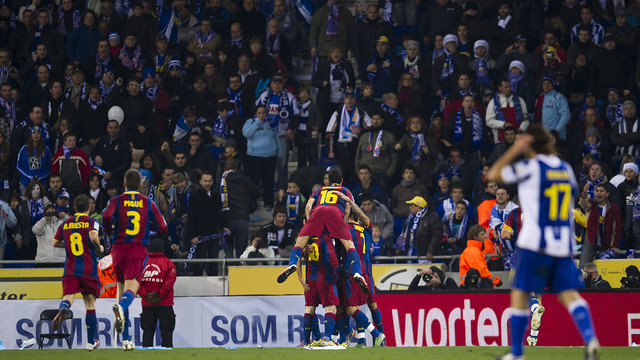 The rivalry between Espanyol and Barça goes all the way back to the very beginning of the 20th century, and the last thirty years have continued the tradition of matches packed with tension, spectacle and anecdotes. Here we pick out five particularly memorable clashes between the neighbouring clubs:

1988/89: Bakero beats N’Kono (2-2)
This game in the 1988/89 league season produced once of the best goals ever seen in the Barcelona derby. In the 34th minute, Eusebio crossed from the right, and the Espanyol defence cleared the ball out of the area, only for it to be met with a thundering volley from Bakero, who sent the ball flying past goalkeeper N’Kono and into the back of the net.

1991/92: Espanyol punished for European snub (0-4)
This game was shrouded in controversy after Espanyol decided not to offer Barça the traditional guard of honour following the latter’s European Cup victory just ten days earlier. Barça were still chasing the league title, which would come on the final day thanks to Tenerife’s famous defeat of leaders Real Madrid. But before that, FCB had a local derby to negotiate, which they did in style despite playing with only ten men after Nando was sent off in the 66th minute.

1996/97: Farewell to Sarrià (2-0)
The last ever derby at Espanyol’s old Sarrià ground also ended with Barça a man down after Figo was red carded after 69 minutes. The blue-and-whites won this game thanks to a brace from Romanian star Raducioiu.

1997/98: First visit to the Olympic Stadium (1-1)
Barça had secured the league title a week before this derby, and this time the ‘parakeets’ did honour the achievement with a guard of honour to welcome the visiting side onto the pitch. This was the first time the derby was played in the Olympic Stadium, where Espanyol played for ten years until 1909. It ended all-square, with the goals cored by Sergio and Figo.

2010/11: Barça’s biggest win (1-5)
FC Barcelona’s second visit to Espanyol’s new home at Cornellà-El Prat produced the biggest ever win in the history of the local derby. The side coached by Pep Guardiola was on fire, with the goals scored by Pedro (2), Xavi and Villa (2). The match was also memorable for the standing ovation that the home fans gave Andrés Iniesta, in recognition of the Barça player’s gesture in memory of the late Dani Jarque after scoring Spain’s winner at the World Cup Final.