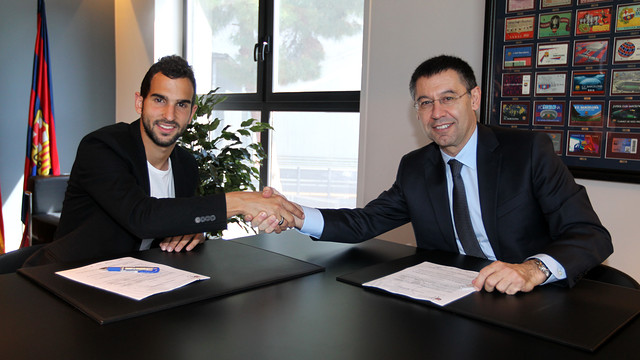 This Friday at the Club Offices, Martín Montoya renewed his contract with FC Barcelona until June 30, 2018, with the buyout clause set at 20 million euros. The player and his agent were joined by president Josep Maria Bartomeu, director general Antoni Rossich, director of sport Andoni Zubizarreta and director of football Raül Sanllehí.

Martín Montoya has been at Barça since he was just eight years old. Now, as he is about to turn 23, he is in his second season with the first team, although he made his debut for the side on September 9, 2008 in the semi-final of the Copa Catalunya against UE Sant Andreu when he was still playing with the youth team.

On May 25, 2012, while still officially a member of Barça B, he made his 12th first team appearance in the Spanish Cup Final against Athletic Bilbao, which FCB won 3-0 and Montoya played the full ninety minutes. For the 2012/13 season he was made a permanent member of the first team squad, playing 23 matches. This season he has featured in 18 games, 12 in La Liga, two in the Champions League and four in the Spanish Cup. He has started 11 of those games, and in 10 of them he has played the full ninety minutes.