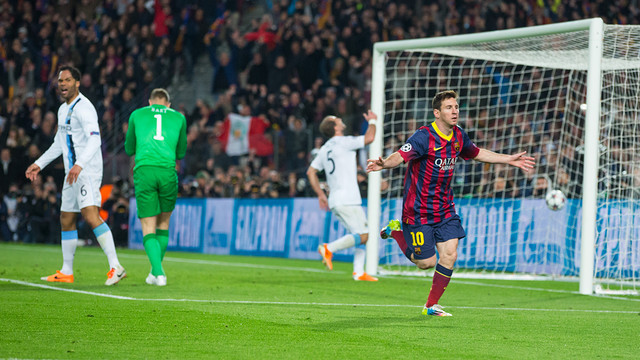 Goals from Messi and Alves see off City and book Barça’s place on the quarter finals.

FC Barcelona laid down a marker for the rest of Europe tonight, cruising through to the last eight of the Champions League with a 2-1 win over Manchester City (4-1 on aggregate) with a performance that put to bed the doubts around the team after their weekend league defeat in Valladolid. Javier Mascherano insisted before the game that Barça weren’t down and out and tonight the team proved him right with an important win over one of the strongest teams left in the competition.

Both teams are used to dominating possession and City began the game looking much more comfortable on the ball than in the first leg, taking control of the first quarter of an hour before Barça imposed themselves on the game and began to create chances- the clearest of which saw Neymar score, only for the ref to rule it out for a dubious off side against Jordi Alba.

In truth though, there weren’t many opportunities for either side in the first half hour – Nasri, then fired straight at Valdes after a great one-two between Silva and Toure and then Neymar had a couple of great chances, but the teams went in goalless at the break.

Dzeko came on for a rusty looking Aguero at the break and City looked sharper at the start of the second half, with the Bosnian striker having a couple of opportunities to make it 0-1 early on, with Kolarov and Silva both looking dangerous. Valdes’ saves proved key and Narça hit back with a great chance for Messi, with only the woodwork denying the Argentinean.

Both sides were looking for a goal now and the tempo of the game increased as City pushed forward and Barça showed their threat on the break and after Lescott fluffed a through ball from Cesc, Messi pounced to open the scoring and put Barça three up on aggregate.

That goal rocked City, who were soon after reduced to ten men after Zabaleta was shown his second yellow for dissent, but the Premier League side showed they could still pose a threat when Kompany bundled the ball home for the equaliser after a knock on by Dzeko from a corner.

There was never going to be time left for a shock and Iniesta set up Alves on the counter to ensure the win on the night late on and ensure that Barça go through to the last eight after two impressive wins against City. Mascherano was right – this team are certainly not down and out!