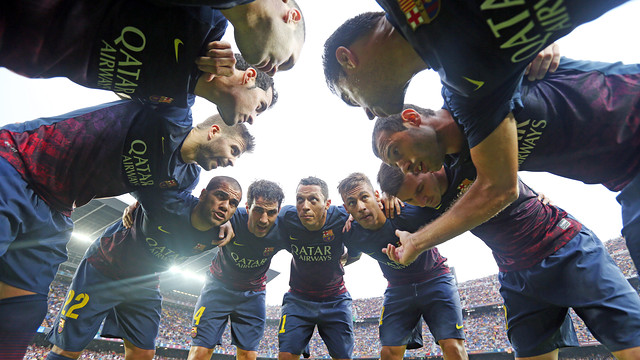 Many recent La Liga titles have been decided in games like tonight’s. When the match is over at the Santiago Bernabéu (9:00 PM CET, Canal Plus) Madrid, Barça and Atlético will have a much more clear idea of their chances of winning La Liga. FC Barcelona’s chances hang on beating Real Madrid this Sunday. A victory would bring the Blaugrana within one point of the current league leaders.

FC Barcelona travelled to Madrid with 21 players, the whole first team made the trip with the exceptions of the injured players: Puyol, Cuenca, Dos Santos and Oier (this last player didn’t make the trip for technical reasons). Therefore, the biggest question is which three players will lead Barça’s attack at the Benabéu.

There are fewer questions regarding Madrid. Carlo Ancelotti confirmed that he will field with his usual eleven: Diego López, Carvajal, Pepe, Ramos, Marcelo, Xabi Alonso, Modric, Di María, Bale, Cristiano Ronaldo and Benzema. The Frenchman, who missed the game against Schalke 04, has recovered in time for the game.

Barça’s most recent victories at the Bernabéu were won because the team’s approach was courageous. That’s how the Blaugrana rallied for the 2-6, the 0-2 and the 1-3 results. In order to keep hopes alive in La Liga Barça must be brave.