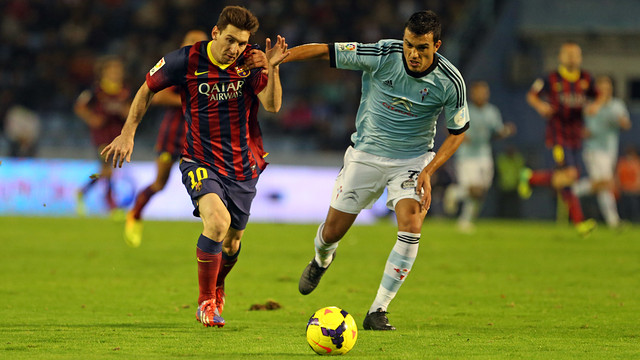 Xavi is left out for the first time in five matches

Sunday’s 4-3 win in the clásico has put Barça back in contention in an incredibly tight championship race. Just one point separates Atlético Madrid, Real Madrid and Barcelona, and any setback could leave any of these teams in a very difficult position indeed. There are just nine games to go, and every one of them is absolutely crucial. It may sound like a cliché, but they all need to be treated like finals, and the next of those at the Camp Nou against a Celta side with plenty of familiar faces (8.00 PM CET, GolT and Canal+ Liga).

The legendary Luis Enrique, who played for FCB for eight seasons and managed the B team for three, is back for the first time as a visitor. His squad includes Fontàs and Nolito, who never managed to make the grade at Barça, while a possible FCB star of the future, Rafinha, will be missing the game through injury.

FC Barcelona desperately need the points to maintain the pressure on Atlético and Real, who both play immediately after this game concludes, the former at home to Granada and the latter away to Sevilla. Gerardo Martino has dropped Oier, Montoya, Afellay and Xavi, the latter being rested after starting five games in a row.

Rotations are expected in a Barça team that has just played one highly intense away match and has another to come on Saturday in the derby at Espanyol. So in tonight’s fixture, the 1000th league game at the Camp Nou, there could well bring chances for Bartra, Song, Alexis and Pedro, who were all on the bench at the Bernabéu.