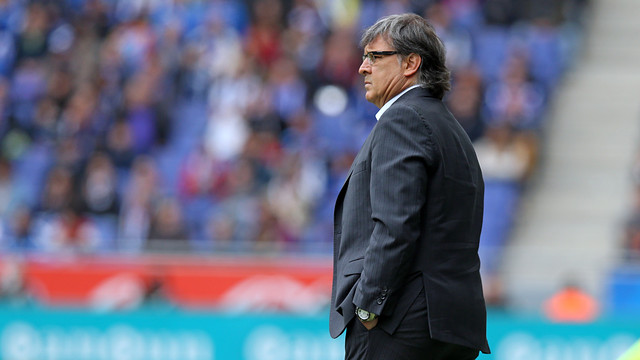 The FC Barcelona manager says the derby was “intense, with a lot of friction and interruptions”

“We want to dedicate this game to Víctor Valdés”, says the manager

FC Barcelona defeated Espanyol this afternoon at Cornellà-El Prat in a match that had “a lot of friction and many interruptions,” said Tata Martino in the post-match press conference. “We were expecting a game like this,” continued the manager, who added that the “first 15 minutes” played out the way Barça wanted. After the first quarter hour, however, things changed. “Espanyol’s pressure improved and we had to resort to longer passes. Espanyol are very well prepared to take control of follow-up plays.”

“It was a risky away game”

The Barça manager hopes that the post-match headlines focus on the football played at Cornellà and not controversial plays. “From 10,000 km away it seems as though football is what’s talked about after matches. I think it’s lamentable that we don’t talk more about football and I’m certain that today we won’t talk about football either,” he said in reference to the play the led to Messi’s go-ahead goal.

When asked about the remaining league schedule, Martino was clear: “I see one good thing and one bad thing. The good thing is that derbies are always derbies and they have to be won. It was a risky away game. On the other hand, we still have very difficult (games) that are very important. We have seven finals left and we haven’t forgotten about our away game to Valladolid – we don’t want to commit the same errors.” He added: “I think it’s important for the players to remember where we were six days ago and where we are now.”

Martino concluded his press conference by dedicating the win to Víctor Valdés: “We want to dedicate this victory to him.”